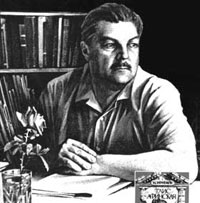 There remains one, the most fantastic explanation, of the case against Yefremov. A. N. Strugatsky, one of the most famous international science fiction writers, a beloved author in the former Soviet Union who with his brother comprised the best known team of the genre’s writers, proffered the explanation in his conversation with Izmailov. In the late 1960s and early 1970s, the U.S. Armed Forces and the CIA had created departments that had seriously studied flying saucers, and possibilities of ET invasion of Earth. The Soviets might have similar ideas.

Mysterious Sky: Soviet UFO Phenomenon (2006), co-authored by Philip Mantle and the author of this article, describes Soviet military research of UFOs, as well as the KGB interest in the subject (dating back to 1920s). Hence, Strugatsky, perhaps unbeknownst to him, was right in the sense that the Soviets had similar agencies and programs. And the very unusual Soviet author interested them immensely.

At the same time, Soviet sci-fi fans came up with a persistent idea that leading sci-fi writers were agents of extraterrestrial civilizations. Many letters reached famous Russian sci-fi brothers Strugatsky. What if a KGB officer, who took over the newly created agency, with “romantic” imagination, believed in the absurd idea that sci-fi writers are ET agents…He ordered that Yefremov was to be under observation while alive, as they were afraid to capture a “live” alien whose actions could be unpredictable. But when the author, or” alien”, died, they could uncover some means of his communications with a civilization that was well advanced, in comparison with ours. Not knowing what the “means” would look like, the KGB grabbed whatever they could. Not finding what they were looking for, they later returned the objects.

This account explains the unusual KGB conduct: the search of the apartment after Yefremov’s death, confiscation of certain items, their attempt to open the urn, the KGB concern that the author was cremated on the second day after his death (no autopsy was performed); even strange questions asked of his wife; and the statement that Yefremov was not accused of anything. The KGB was simply interested in his work…He interested them, as a person, or…

After all, the man was a visionary who wrote about alien artifacts found during paleontological expeditions (his novel Star Ships was not published until 1948, because of the ideas presented there that there are many inhabited planets in the Universe, that the evolution of sapient beings is quite similar, that all sentient beings are humanoid in appearance). Professor Yefremov was convinced that all claims to the effect that we will not be able to understand civilizations that have arisen on other planets in different conditions were groundless. The factual reality, in his words, was this: the universe is built according to the same plan, from the same bricks or elements, with the same properties and cause-and-effect relationships. Consciousness, thought, and intellectual matter throughout the universe are structured in accordance with these laws, and, as much as they originate from them, represent their product and reflection. Therefore we would definitely understand each other’s minds; we cannot fail to…

He wrote about holography any years before it was discovered.

Yefremov was only able to publish a story he wrote back in 1943, about genetic memory, in 1968 (A Secret from Hellas , proved to be too “mystical” for the ideologists…). His story of “life-giving” water, to be discussed later, written at the same time, as well as his story about mysterious Mongolian death worm was published in 1944.

There had to be knowledge in his possession that has not been revealed fully. Yefremov was the person who described such fascinating concepts as the ancient Imhotep directly seeking information and receiving accurate answers from the Egyptian deity Thot in his sanctuary in a place known as Ra’s Souls…The wise Imhotep, a great mind, statesman and scientist of ancient Egypt came back to his Pharaoh with the accurate answers, and much more: he was shown wonders that no previous Pharaohs had ever been shown.

Imhotep was given knowledge back in approximately 2880 BCE, in the period when many other centers of newly gained knowledge sprung up in China, Crete, Sumer, and India; when men received knowledge from “gods” who arrived on our planet…Imhotep kept objects, similar to powerful modern computers, in a special sanctuary.

The KGB, likely interested in Yefremov’s precognition of holography, would be no less interested in his knowledge of such computers. The state security service no doubt found other talents and abilities of the Russian Jules Verne to be of interest to them.

This was a man, who knew English, French and German and who knew and discussed Agni Yoga, an esoteric teaching founded by the Russian painter and philosopher Nicholas Roerich and his highlyadept empathic wife, Elena. Inspired by the Vedic traditions, as well as by Buddhism and writings of H.P. Blavatsky, the Roerichs published the "Agni Yoga" series of books, with contents inspired by the Mahatmas from their stronghold in the Himalayan Mountains, Shambhala.

Yefremov also knew well a very curious book (unavailable in the USSR), "Le Matin des Magiciens (The Morning of the Magicians), really, the progenitor for most of the "New Age" literature. Yefremov predicted discovery of the Yakutia (Sakha) diamonds years before anyone would suspect they would be found (in his story Diamond Funnel, 1944). The man possessed unusual insight into essence of things, interconnectedness of forces of nature and human history. He called it “scientist’s intuition” in his 1972 letters that served as a preface to the English-language edition of Andromeda.

He recalled in his preface to an early collection of stories, that when he was torn between remaining a sailor and becoming a scientist, he happened to be in a motor-boat on the Caspian Sea on his way to Baku. Yefremov was gazing into the sunlit depths of the sea. In some places the bottom was quite visible…and he realized what he was seeing down below. It was an inaccessible, submerged town, with walls and towers. Yefremov began to discern elusive outlines of streets and houses…but then the wind blew across the surface of the sea, and the vision was gone. When he came ashore, the sailor found waiting for him a telegram from Academician Sushkin, a paleontologist who influenced his life before, offering him a minor position in the Academy of Science . Young Russian sailor decided to pursue the life of a scientist, to explore the unknown…

Yefremov mentioned something there else that was of interest to the author of this article. During his travels (in Gobi Desert, etc.) he got into habit of day-dreaming where visions would arise before his eyes that were not so much mirages as scenes from the play of his imagination, weird and unusual scenes, but quite real at the same time…

He possessed incredible knowledge of hypnosis; his “experimental” book the Razor’s Blade (1963) includes four parts and is notable for a huge amount of the scientific facts and dynamism (hypnotism, genetic memory, human psyche, Alexander the Great and his mysterious crown found at the bottom of the ocean, ancient India, nonstop adventures…) was always the bestseller of the Soviet black markets, and is reprinted year after year.

Allan Yefremov had revealed in 1997, during the First International Yefremov Symposium, that his father was quite familiar with Buddhist Hinayana and Mahayana systems, Pythagorean and Gnostic teachings, learned five stages of Yoga, and was interested in Nestorianism and Manicheanism.

It would be wrong to make him an adherent of occult sciences. Yefremov was an atheist and believed in his version of Communism. He was not a mystic, but neither was he dogmatic. Allan Yefremov revealed that his father was greatly interested in Hinduism, religion of the world soul. His novels about ancient Egypt are full of very curious details. At the same time, he possessed a great talent: he could accurately diagnose diseases, surprising doctors. He told his son that nothing pointed to Nicholas Roerich’s speedy demise...

There is something else that is quite extraordinary about Yefremov, and had to be known by those who kept him under their watchful, spying eyes. According to P. Chudinov, PhD of Biological sciences, and Professor Yefremov’s student and assistant, the man had possessed a fantastic sense of being one with Nature. It seemed to people around him, on occasions, that he had visited the areas where his expeditions arrived in, although they knew for certain he had never been there before…This is important to keep in mind when we look at his Mongolian “dinosaur expeditions”. As a geologist, Ivan Yefremov discovered unique deposits of oil, copper, lead gold…As a paleontologist he discovered unique fossils of prehistoric animals and solved many complex riddles of the origin of the long-ago vanished life forms…

Professor Yefremov had a special fascination with the Minoan civilization. Ancient Crete and its mysterious, vanished inhabitants held a special interest for the Russian writer. Again, he seemed to know much more than was revealed in his novels…

Towards the end of his life, Yefremov was interested in everything (except political science, according to Allan; his extent of knowledge was immeasurable. The KGB might have been interested in the source of all his knowledge and vast talents.