This is Part II of the article. Read Part I here 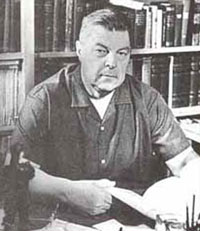 His novels Andromeda-the Space Age Tale, and The Hour of the Taurus describe panorama of life on Earth and inhabited outer space set at the end of fourth millennium. The world he described in Andromeda was an attractive alternative to the Soviet reality of Khruschev’s socialism, although many Soviet people still believed that Soviet-led scientific and social progress would lead to true Communism (what is meant is the culmination of social development, not ideology itself).

However, Yefremov was no dissident, and apparently did change some controversial (for the regime) paragraphs in his novel The Hour of Taurus , when the Communist Party boss Demichev had a discussion with the author after denunciations of the novel made their way to the top (one of them came back from the KGB chief Y. Andropov).

Professor Yefremov was quite ill in 1967, when he began to write the book; he knew there would be difficulties with its publication. According to his letters, he led a life of an Indian ascetic man; he almost died in the prior year, and worked slowly.

The book was published after the changes were made, but after Yefremov’s death it was banned and removed from Soviet libraries until 1988. It was a sci-fi story set on a fictional, gloomy and dark planet Tormans whose very Soviet-like and Red Chinese-like system and ruling regime are criticized. Tormans is inhabited by descendants of Chinese refugees who fled Earth centuries ago; when the spaceship from the now-changed home planet arrives, they exist in a totalitarian society.

The writer never mentioned Russian Communist leader Vladimir Lenin in his futuristic novels, although he was pressured to. In the 1930s the Communist Party would not accept him for membership because of his father’s “wrong” social class, and in the 1950s Yefremov declined to join it, stating that his father’s social class had not changed… Professor Yefremov could not leave the USSR after his visit to China in 1958, to prepare the joint Soviet-Chinese scientific paleontological expedition, even if he wanted to. He was not chosen for the actual expedition, and this caused him to leave the beloved Paleontological Institute in anger.

The authorities tried to silence any mention of Yefremov’s achievements (even in paleontology…) after his death, and for a number of years they did succeed, until of a massive campaign of famous Soviet scientists, artists, pilots, and cosmonauts, together with his courageous wife, forced the Communist ideologists to relent in the mid-1970s. The other explanation could be that the criminal investigation did not find whatever Andropov’s henchmen were looking for…

One month after his death in October of 1972, the KGB sealed off his modest apartment, full of books, diaries, scientific treatises, maps, notebooks, and many other items. The KGB looked for more than just subversive literature in his apartment on the Spasoglinischevsky Pereulok (Lane).

Eleven KGB officers searched the apartment using X-rays and a metal detector. They intended to open the urn with Yefremov’s ashes, but his wife was determined not to let them. When she tried to find out later what was the reason for all this, the KGB said that they found an anti-Soviet article someone (who left no return address) mailed to the writer. At the same time she was repeatedly questioned about her husband’s wounds, and all details of his life, from birth to death. The prosecutor’s office wanted to know how many years she actually knew Yefremov. She asked the KGB a direct question: what are you accusing him of? The direct reply was that they are not accusing him, as he is a dead man.

Yefremov’s wife, Taisia Iosifovna, kept a copy of the KGB (Moscow and regional departmental jurisdiction) search report; it stated that they were looking for “ideologically harmful literature”. They confiscated Yefremov’s old photographs (from different periods of his life), his letters to his wife, letters from readers, photos of his friends, and receipts. No author’s manuscripts were taken, but they did take homeopathic medicine bottles, some minor things; a book about Africa in English (it had dry leaves inside); his geological minerals, a cane with a “sharp metal object inside”, and a stick made from colored metals. They never returned the last two objects. The KGB had searched the apartment of the famous paleontologist for over 13 hours. Were they looking only for subversive literature? It is hardly likely…

The KGB had continued the investigation of Ivan Yefremov’s life and activities for eight years after the writer’s death. The “Yefremov’s Dossier” comprised forty (40) volumes.

Three Russian investigative journalists tried to uncover the truth. One of them, A. Izmailov, published his findings in NEVA magazine (Issue 5, 1990). Two others, Nikita Petrov and Olga Edelman, published their findings in 2002 in http://www.ruthenia.ru/logos/number/2002_02/02.htm . They were able to see the files pertaining to the case, files from the Office of the Prosecutor of the USSR.

The absence of the modern division of power in the USSR resulted in the empowering of the Prosecutor’s Office with unprecedented supervisory functions, enormous and unchecked powers. Among the objectives of the Prosecutor’s Office was to ensure compliance of the governmental bodies with the Constitution and laws. The prosecutor used to be the sole guarantor of the proper implementation of laws during pre-trial inquiry and investigation. He exercised the power of active interference to rectify the consequences of the unlawful actions of investigation bodies. He was issuing warrants of arrest, surveillance and other actions significantly restraining the constitutional rights of the citizens.

The Prosecutor’s Office was empowered to oversee cases initiated by the state security services (KGB), and every criminal case had its twin file in the Prosecutor’s Office, where updated information from the case was filed. The case had this designation in the Russian archives: ЦГАРФ . ф . Р -8131. Оп . 36 Д . 5653 (according to the Russian historian N. V. Boyko who presented his information in 1997, at the First International Yefremov Symposium).

The contents of the dossier provided no clear answers and raised even more questions. The cause of death was not determined, and Yefremov might not have been the person her appeared to be, that is what the files stated, and because of the above, a criminal case was opened, and an investigation ensued in January of 1973. No mention of the November search of the deceased author’s apartment was found in the file (although the Prosecutor’s Office authorized it, as the journalists learned later). The criminal case was officially closed in March of 1974, and the Prosecutor’s Office was informed. Fifteen people were questioned about Yefremov’s identity, and it was determined that he died from natural causes. But the KGB investigation went on.

Many years later, Izmailov was able to meet with the investigator, who told him there was no underlying denunciation against Yefremov. Habibulin, the original investigator, was veryreluctant to talk about the case even in the waning days of the USSR. In 1989 the journalist was able to get an official response from the Moscow KGB office that the search of Yefremov’s apartment was due to suspicion that the author died a violent death. But the search had caused such suspicions not to be confirmed…

Allan Yefremov was certain in 1997 that there was a denunciation (donos in Russian) to the KGB against his father, had definite suspicions as to who might have done it, but would not talk about them without definite proof.

The rumors that spread through Moscow in 1972, after the search, had it that Yefremov was actually a British agent who “substituted” the writer during the Mongolian expeditions. Some rumors had it that the KGB installed recording device in the author’s home, and recorded his death…According to the former office of the KGB’s Second Department (Counterintelligence), V. Korolyov, who published his article in 1991 (Stolitsa Magazine), their Moscow office had few activities to occupy the time. To justify their murky existence, Lt.-General Alidin decided to make Yefremov into a British agent. Viktor I. Alidin was head of the Moscow and regional KGB from 1971 to 1986, a very unusual career stretch. And for eight years after Yefremov’s death Alidin had kept the case open…Petrov and Edelman, who have researched thousands of KGB files, found very unusual inconsistencies in the Yefremov’s files obtained from the Prosecutor’s Office.

But besides the inconsistencies stated above, the idea that the British intelligence would spend money and efforts for sending a spy to the USSR under a guise of a paleontologist is somewhat outlandish. The period of early 1970s was the time of the glorification of the KGB, and its operatives, Soviet “knights”, depicted as dedicated and modest heroes out to disrupt evil foreign espionage nests that had penetrated the Socialist Fatherland. While Alidin remained silent about the Yefremov affair in his memoirs, Petrov and Edelman cited general Oleg Kalugin’s (a famous KGB defector living in the U.S.) mention of the Moscow KGB’s account of a Soviet author’s relative who escaped to the West, while a British spy took his place to ideologically destroy the Soviet society; apparently Alidin had pestered the Kremlin with this “case” for years. The Soviet author was not mentioned by name.

Why was the case against the Yefremov initiated by the KGB? The British espionage accusation is not in the files pertaining to the case. Accusation of “anti-Soviet” activities is nowhere in the files (unlike in most other KGB cases); unless more files are missing from the special division. The Prosecutor’s Office division that handled Yefremov’s files would not even deal with major espionage cases. But with his death, had Yefremov been suspected of being a spy, the case would have been closed. Yet it was not…What remains is the mysterious verification of identity, the accusation that Yefremov was not who he pretended to be. The investigative journalists came to a conclusion that for some unknown reasons, the KGB needed a formal cover-up to initiate a criminal case against the Russian writer. Inconsistencies did not bother the KGB operatives. When the need to continue the case was gone, they stopped the case.