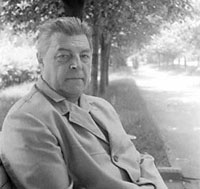 He was born in a village in 1908 (the true year of his birth), the son of a peasant’s daughter and a Russian government official. As a teenager, lost in the war-torn land, he joined the Red Army, was adopted by a motor transport company during the Civil War and he was badly wounded by a shell from a British gunboat.

Countless other Soviet boys (and adults), including the author of this article, for years had read his stories about explorers and scientists; and loved Yefremov’s bold science fiction novels, too. He was a distinguished scientist; geology and paleontology were his main fields of applied research. Doctor of biological sciences, Ivan Yefremov had written more than 100 scientific works (unfortunately, only few of them were published in languages other than Russian ), a brilliant sci-fi writer, and a bold visionary.

This was a human being who loved to help and assist people any way he could. His kindness and goodwill were combined with toughness, for he knew how to defend his point of view; yet he always remained respectful, and mindful of the dignity of other people.

Let us look briefly what Yefremov accomplished between the time he left the Red Army and 1972. He worked as a sailor in the mid 1920s (in the Far East and the Caspian Sea); was a driver; participated in zoological expeditions, and began his scientific education in paleontology.

He was no bookworm! Yefremov, a physically powerful individual with a sense of humor, was adept in anything he did; according to his son, the man could do the work of a carpenter, a lathe operator; and repair any device.

From 1929 on he dedicated himself fully to academic studies, and participated in the paleontological expeditions to remote areas of the Urals, Central Asia, and Siberia. Ivan had a keen eye, and took detailed notes; later, he authored stories about his travels and work. He was a capable student, too, and received his Ph. D. in 1935 (at the Leningrad College of Mines). Then, in 1937, in a very bloody year of Soviet history, Yefremov became the director of the laboratory of low vertebrates of Moscow Paleontological Institute. Finally, he received the Doctor of Science degree in the spring 1941.

A talented paleontologist, Ivan Yefremov coined the term taphonomy and founded the study of taphonomy in 1940 (and by doing so has turned paleontology into exact science). Taphonomy (“laws of burial” in Greek) is the science that studies the process of decay and fossilization. By using the methods of taphonomy it is easier for scientists to find the dinosaur bones.

When Nazi Germany invaded the Soviet Union, Yefremov was sent to carry out the defense-related projects in the Urals ( but he wanted to go to the front, to fight the invaders…). There he began his writing career by writing and publishing wonderful short stories and science fiction novels. Looking back now, it is uncanny that Yefremov was able to predict the discovery of diamond deposits in Yakutia; it is fascinating to realize that because of his ideas a Soviet scientist some years later was able to discover practical holography. What is also uncanny is that the KGB later whined that Yefremov knew where the diamond deposits were located but would not tell the authorities and instead revealed the state secret through his story.

His imagination ranged between mysteries of ancient history and depiction of a distant future. His novels include the wonderful The Land of Foam, the story about friendship among escaped slaves (Africans, Greeks, Semites and others) set in ancient Egypt, subtropical Africa, Crete and Greece; he enthralled Soviet readers with his description of Minoan Crete, and other ancient sites. His novel Tais of Athens described chronicles of the protagonist’s life from meeting Alexander the Great, to her travels through the Hellenic world to her reign as queen of Memphis in Egypt. It was a superbly researched novel describing the history, customs and geography of oecumena, the populated ancient world; it also carried mention of ancient and lost scientific devices …such as medical machine used in China for accurate diagnosis, and Babylonian telescopes.

He loved Earth and had faith in humanity’s potential, but knew of the dangers that could destroy both. Long before it became an issue and fashionable, Professor Yefremov demonstrated concerns about ecology of the planet, and harm to the environment during the nuclear arms race.

Yefremov believed that Man is part of vast Nature whose redoubtable essence no one is able to determine to the fullest extent. His protagonists are beautiful, highly moral, superbly trained people, both physically and psychologically. Yefremov was convinced that a human personality can be fully established in the process of physical, emotional, and spiritual development.

Erich Fromm, psychoanalyst and author, had an influence on Professor Yefremov’s outlook. Breaking from the Freudian psychoanalytic tradition which focused largely on unconscious motivations, Fromm held that humans are products of the cultures in which they are bred. Yefremov was not as kind to the late Middle Ages as Fromm. To him, they represented religious fanaticism, the dark ages, burning of those who were different, horrible fate of women…Throughout his novels and stories one sees great influence of ancient Greece. Yefremov was a lover of life; he constantly emphasized beauty, especially the beauty of human body, beauty of healthy Eros. He hated religious fanatics, all those who destroyed beauty and human psyche.

He possessed encyclopedic, comprehensive knowledge, and his books, whether historical or sci-fi novels were full of precise scientific details. Yefremov’s knowledge (revealed in his stories and novels) encompassed biology, physics, astronomy, sociology, philosophy and medicine. Everett C. Olson of the UCLA Department of Biology, a former chair of the department, member of the National Academy of Sciences, and recipient of numerous medals and awards, was an internationally recognized pioneer in studies of the origin and evolution of vertebrate animals. He passed away in 1993. Professor Olson, who knew the Russian scientist and corresponded with Ivan Yefremov, described his colleague as a person who seemingly did not feel boundaries of time and space. The Russian writer was equally at home among the stars, in the open ocean, in the cataclysms of the distant geological epochs, or in the nonexistent world of anti-matter. On occasions Yefremov seemed to the American scientist to be an enigmatic representative of his society. What society?

Ivan Yefremov dared to have his own vision of Communism: of a humane society, of a future world based on the ideas of equality of all in reason and in spiritual life regardless of the distinctions between races, tribes, customs and religions. Professor Yefremov took fundamental principles of Soviet ideology (Communism and dialectics) and applied to them his own meaning, greatly removed from their orthodox Marxist ideas. His complex philosophy combined materialism with a dialectical (but non-Marxist) base and ideas derived from Eastern philosophies . He was not neither truly a Soviet (in the ideological sense) nor an anti-Soviet writer. But millions of Soviet readers devoured his books and visions of a different, complex and beautiful future.

Professor Yefremov’s vision of Communism did not include the existence of the all-knowing and “wise” Communist Party, and the sinister, hilarious, boring, stifling, ridiculous attributes of every-day Soviet life. His books, even the utopian Andromeda –the Space Age Tale (1956) challenged the official ideology by exposing the inadequacy and constraints of existing Marxist dialectical materialism and showing the necessity for a new spiritual philosophy. This did not bode well with the Soviet leaders and the “shield and sword” of the regime, the KGB, although the Russian writer was a patriot of his country, and did not view Western capitalism as an alternative. He was concerned with the future of the planet, and had his own ideas what it ought to be.

At the same, he was con vinced to the day of his death in 1972 , that war between the Soviet Union and China was unavoidable, and he believed the United States should be afraid of China, too. This is according to The Other Side of the Medal (1990), Professor Everett C. Olson’s book published in UCLA.

Average Soviet people loved his novels, to the extent that many of them (including the nation’s cosmonauts) chose their professions and education because of the influence of Yefremov’s novels. The novel was translated into dozens of languages of the world. That stupendous future he described in Andromeda-the Space Age Tale and Cor Serpentis (Heart of the Snake) ( 1958 ) was drastically different from the dreary contemporaneous reality, and worth fighting for. But even such prominent Soviet personalities as the father of Soviet space program, Sergey Korolyov, according to his assistant V. Tsibin, loved Andromeda and Yefemov’s ideas.

What an unusual adventure genre and science fiction writer he was for the Soviet readers: he believed in the spiritual power of a man, psychological and physical self-improvement; he created a vision of a magnificent, brilliant, breathtaking future of humankind, of space exploration, of cooperation between ours and the extraterrestrial civilizations through the use of the Great Circle, a marvelous association that consolidates isolated planets (like Earth) in the interconnected totality by remarkable methods of communication. And yet the future was not as bright in a later novel…