Doctors face a very difficult dilemma – they have to decide which sex to choose for a newborn child. 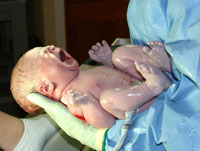 The parents of the unusual baby are trying not to interfere in the doctors’ decision-making process. The young couple is just praying to God to help the  experts on genetics make the right decision and not break the life of their long-awaited baby.

The family of Muscovites - Sergey and Olga - has been waiting for their baby for a long time. Sergey was very happy when the doctors told them that Olga was pregnant.

Olga, 20, had a very easy pregnancy. She was working as long as she could, and her colleagues even began to joke that Olga would have her labour at the workplace.

The child’s sex was not actually important for the parents. Olga even asked the doctors not to tell her the sex of her child.

“We wanted it to be a surprise. We wanted this child so much,” Olga says.

The child was born in time. The young mother almost burst into tears when she heard the first cry of her child. However, Olga could not understand why doctors did not bring the baby to her. A few hours later the doctor came to Olga’s ward and tried to explain that her child was a hermaphrodite. The newborn child had both female and male traits.

“Doctors say the child is half a girl and half a boy at the same time. They also say that the child can successfully be formed either as a boy or as a girl,” Sergey says.

Five days after the labour, Olga checked out from the hospital, but her baby was put to the pathology department, Life.Ru reports.

Now experts are waiting for the results of the genetic examination.

“In this particular case only genetics can say for sure which type of development, male or female, the child’s organism is more prone to. We are going to love our baby in any case,” Sergey says.

According to the experts, in this case the main thing is not to be mistaken with the genetic predisposition of the child's organism. There is nothing difficult in the medical operation to form the child’s sex.

“There were cases when an androgynous child was brought up as a boy, but when he became a teenager, he started to feel like a girl,” doctors say.