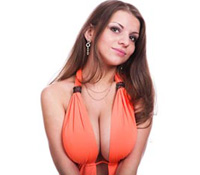 A press release from WoW Gold said that the deal was signed and the fee was paid to the woman. Spokespeople for the company said that the money had not been wasted because there was enough space on Anna’s large bosom (with no implants) to advertise the company, NewsruIsrael website reports.

Anna Morgan is 19. She goes in for tennis, hockey and computer games. The woman recently signed a contract with Top Studios (Los Angeles, California). It is not known whether Top Studios is going to receive anything from Anna’s tattoo deal. Anna will have the company’s logo tattooed on her breasts on June 15 this year.