Killer sects: Eternal life and promised land in return of money and soul

Notorious Russian “healer” Grigori Grabovoi, has been found guilty on 11 counts of fraud. Grabovoi set up a sect known as The Teaching of Grigori Grabovoi. He positioned himself as a healer and promised people to resurrect their deceased loved ones. Russia’s law-enforcement agencies paid attention to Grabovoi in 2004, after he publicly claimed to be able to resurrect the children killed in the Beslan school siege. The “healer” charged about 40,000 rubles (about $1600) for his services per person. 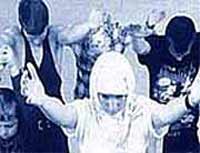 Killer sects: Eternal life and promised land in return of money and soul

The self-proclaimed “healer” has been sentenced to eleven years in jail.

It is worthy of note that specialists have not found a common definition to the word sect. Some determine it as a religious group, which does not have the recognition of the general public. Others say that a sect is an ideological group of people who follow their charismatic leader. Both of these definitions say that a sect leader has a very strong influence in his supporters. Below you can find the list of the most dangerous sects in the world.

5. Seventh-Day Adventists. The Church of Seventh-Day Adventists appeared in the United States during the middle part of the 19th century and was formally established in 1863. Among its founders was Ellen G. White, whose extensive writings are still held in high regard by the church today.

Much of the theology of the Seventh-day Adventist church corresponds to evangelical teachings such as the Trinity and the infallibility of Scripture. Distinctive teachings include the unconscious state of the dead and the doctrine of an investigative judgment. The church is also known for its emphasis on diet and health, for its promotion of religious liberty, and for its culturally conservative principles.

A tragedy happened in the USA in the 1990s, when about a hundred of Adventists were killed. David Koresh, the leader of a Branch Davidian religious sect, which spun off from the Seventh-day Adventist church, prophesied about the coming end of the world for too long. The fake messiah did not want to leave the world alone. About a hundred of his insane supported, including Koresh himself, died in the fire during the siege of their building in Waco.

4. The Manson Family. Charles Manson was a mentally unstable individual, a maniac who considered himself a prophet. He declared war between the black and the white races. He said that he had foreseen that war that would clear the planet. At the time the Family began to form, Manson was an unemployed ex-convict, who had spent half his life in correctional institutions for a variety of offenses. In the period before the murders, he was a distant fringe member of the Los Angeles music industry, chiefly via a chance association with Beach Boy Dennis Wilson. After Manson was charged with the crimes, recordings of songs written and performed by him were released commercially; artists including Guns 'N' Roses and Marilyn Manson have covered his songs in the decades since.

Manson's death sentence was automatically reduced to life imprisonment when a decision by the Supreme Court of California temporarily eliminated the state's death penalty. California's eventual reestablishment of capital punishment did not affect Manson, who is an inmate at Corcoran State Prison.

3. Heaven’s Gate. Heaven's Gate was the name of an American UFO religion based in San Diego, California and led by Marshall Applewhite and Bonnie Nettles. The group's end coincided with the appearance of Comet Hale-Bopp in 1997. Applewhite convinced thirty-eight followers to commit suicide, which he claimed would allow their souls to board a spaceship that they believed was hiding behind the comet.

Further, Heaven's Gate believed that the planet Earth was about to be recycled (wiped clean, refurbished and rejuvenated), and that the only chance to survive was to leave it immediately. While the group was formally against suicide, they defined "suicide" in their own context to mean "to turn against the Next Level when it is being offered", and believed that their "human" bodies were only vessels meant to help them on their journey.

2. Aum Shinrikyo. Aum Shinrikyo, now known as Aleph, is a Japanese new religious movement organization. The group was founded by Shoko Asahara in 1984. The group gained international notoriety in 1995, when it carried out the sarin gas attack in the Tokyo subways.

The movement was founded by Shoko Asahara in his one-bedroom apartment in Tokyo's Shibuya ward in 1984, starting off as a Yoga and meditation class known as Aum-no-kai ("Aum club") and steadily grew in the following years. It gained the official status as a religious organization in 1989. It attracted such a considerable number of young graduates from Japan's elite universities that it was dubbed a "religion for the elite".

1. People’s Temple. It is the most horrendous sect in the world. Peoples Temple was an organization founded in 1955 by Reverend James Warren Jones (Jim Jones) that, by the mid-1970s, possessed over a dozen locations in California. Peoples Temple is best known for the death of over 900 of its members that occurred in Guyana at the Peoples Temple Agricultural Project (informally called "Jonestown"), a nearby airstrip at Port Kaituma and Georgetown, on November 18, 1978.

On November 17, 1978, the group was visited at Jonestown by Leo Ryan, a United States Congressman from the San Francisco area, who was investigating claims of abuse within the Peoples Temple. During this visit, a number of Temple members expressed a desire to leave with the Congressman, and on the afternoon of November 18, these members accompanied Ryan to the local airstrip at Port Kaituma. There they were intercepted by Temple security guards who opened fire on the group, killing Congressman Ryan, three journalists, and one of the Temple defectors. A few seconds of gunfire from the incident were captured on video by Bob Brown, one of the journalists killed in the attack. On the evening of November 18, in Jonestown, Jones ordered his congregation to drink cyanide-laced Flavor Aid. It was later determined that Jones died from a gunshot, with a contact wound in a location and angle consistent with being self-inflicted. His body was also found to contain high doses of drugs. In all, 918 people died, including over 270 children. This includes four that died at the Temple headquarters in Georgetown that night.