A giant figure that resembles the Roman numeral VI composed of wide trenches was discovered near the Havda village in the Kutch district of the western Indian state of Gujarat. 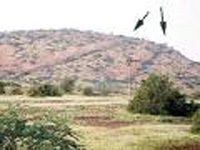 It has evoked the curiosity of archaeologists because such signs have mostly been observed so far in Peru. Each arm of this feature is a trench that is about two meters wide, two meters deep and more than 100 meters long.

Ancient scriptures claim that this area often received UFO’s from the outer space - the chariots of fire. Archeologists suggest that the area might have been used as a spaceport by the Harappan civilization, which had one of the most fascinating yet mysterious cultures in the ancient world.

Located along the Indus River in modern-day Pakistan this civilization was named after the city of Harappa and is famous for its amazing knowledge of astronomy.

Harappan priest-astronomers closely followed the planetary movements composing a star-calendar that was later adopted by the Aryans.

Excavations in India had previously shown that the ancient settlers suddenly abandoned and re-inhabited their fortified city in the Kutch reigion several times for reasons yet unknown. This is where the mysterious figure was found, which may very well be the traces of an ancient spacedrome.

The meaning of the number remains a mystery.