Ufologists and representatives of traditional sciences continue to argue over whether rumours of the implantation of mysterious mini-transmitters in human bodies have any real basis. UFO researchers talk of an evil alien conspiracy. So much evidence for such implants has accumulated that it is becoming more and more difficult for serious researchers to brush them aside. Pravda.Ru sums up the fantastical explanations. 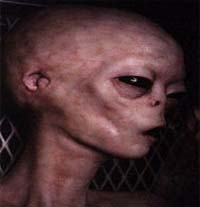 Read more articles about aliens living among us here

As confirmed by ufologists, for some time now, tiny objects capable of implanting themselves in various parts of the body have been discovered in people: in mucous membranes, under the skin of one’s scalp, in the bones of one’s arms or legs – on any part of the human body. As a rule, they do not cause significant discomfort and are discovered by chance, for example, in x-ray images, but once brought out into the light, they invariably throw researchers into confusion. These things, it seems, contain mini-transmitters.

This discovery was first reported a few years ago by therapeutic doctor Maddy Nolan. She was treating patients on the island of Whidbey (Washington State, USA), when she came across a whole group of adult men and women, every one of whom had these transmitters in their body. In each case it was the same type of subcutaneous implant on the inner leg, just above the knee. They were shaped like tiny cylinders and were so close to the surface of the skin that the affected area had become mildly inflamed and reddened.

When the doctor rubbed the area, the little objects began to decrease in size and disappear. Nevertheless, these implants remained under the skin of each of the patients she studied. “I realized,” wrote Maddy, “that each of these implants was emitting (or receiving) some sort of tracking signal or something of that sort.”

According to her survey, each of these people remembered the same thing. Whilst in their room, the person had suddenly heard a loud noise like a clap of thunder (some testified that they had seen a light), and following this, the person became aware that two hours had somehow passed. These factors allow researchers to suppose that the event could not have occurred without the intervention of pilots or the technological methods of a UFO.

There is less basis for attributing this to fraud by earthly special services, firstly because of the lack of explicable aim for such a control and secondly, the structure of the implants itself clearly supersedes a terrestrial level of technology.

Ufologists have decided to analyze the mysterious implants with the help of laser-emitting spectroscopes. Darrel Sims, surgeon Roger K. Lear and others are involved in conducting this research.

D. Sims has created a new organization in the USA: the Fund for Interactive Research and Space Technology (FIRST) to elaborate rules for the realization of such operations as the microanalysis of the contents of substances implanted and the correct protocol for results.

Dozens of operations have been carried out here and the elemental composition of the implanted micro-mechanisms has been clarified. The results of a chemical analysis of these mysterious objects are astonishing. They reveal a whole factory of elements created on a maximum area of 4x5 mm. The following list shows the composition of one implant, studied by Dr R. G. Lear: Al, Ca, Fe, Ba, Cu, Mg, Mn, Na, Ni, Pb, Zn, Si, Ti… Ufologists have drawn attention to the fact that this is very similar to the composition of microchips used in information technology. Perhaps their function is also similar: to track people’s whereabouts, control their physical condition, complete an essential connection…

Or perhaps they influence the way of thinking and the actions of the subject, at the X hour. After all, we use tracking mechanisms on several animal species: birds, dolphins…

The possible aims of such tracking on humans remain unclear.

Official science and traditional medicine are completely ignorant with regards to this phenomenon. No-one has publicized anything or made any research proposals about the implants.

Furthermore, such scepticism has been expressed in the National Health Service with regard to UFOs and aliens that some enthusiasts have even come to suspect a successful cover operation.

Many explanations exist as to the purpose of the implants. For example, one theory is that the implant is some sort of energy block, capable of extracting all sorts of information from a person. Another is that it pumps out psychic energy from a person and perhaps even programmes his behaviour.

The theory that there are worlds controlled by parasitic alien energies in this universe is not new. According to this belief, crime and the never-ending wars on Earth are, in their own way, a giant line production of fear energies, on which parasitic worlds feed. Of course, traditional science rejects the idea of even discussing such a possibility.