What happens six feet under after interment?

Most of us believe in the afterlife. We tend to believe that our souls will make it to the best of all worlds one way or another. That is probably true though opinions on the subject vary. People are less inquisitive about the way of the mortal remains. On the face of it, the mortal remains are undoubtedly perishable. But things are more complex than they seem. 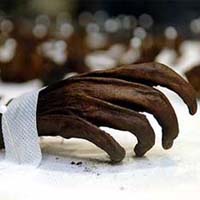 What happens six feet under after interment?

According to the law “On internment”, the decomposition period of a human body is 15 years. The number is based on the fact that it takes from 10 to 12 years to decompose a human body buried at a depth of 2 meters provided that the climate is temperate and the mechanical makeup of soil is average. In most cases the period is long enough for complete decomposition of a body because skeletal bones are subject to active decay due to subsoil acids. In the meantime, it takes just a few minutes of talking to archeologists, forensic specialists, or gravediggers to appreciate that the above professionals experience all kinds of anomalies on a daily basis. The processes occurring in a human body after interment are quite complex and highly unpredictable at times. Those processes even gave rise to a branch of science – taphonomy. The main factors affecting the decomposing of a human body include temperatures, access to oxygen, embalmment, cause of death, internment method, humidity, type of a funeral attire and a surface the body lies upon. Studies in this field are of serious applied and academic importance though scientists are still incapable of explaining numerous mystical phenomena involving human remains. Theologians of different orientations offer their services in such cases.

An unusual research facility dubbed the Body Farm is located in close proximity to the town o Knoxville, Tennessee. The facility is run by a medical center of a local university. The Body Farm was founded by Dr. William Bass, an anthropologist, for the purpose of study of issues relating to the decomposition of a human body. Several hundred bodies lie in a grove of about one hectare. It is worthy of notice that more than 300 bodies were bequeathed to the proving ground by volunteers. The remaining number comprises the unclaimed bodies. Some bodies lie on the ground in various positions while others are buried at various depths. Some are put inside the old cars, others are placed in the burial chambers. A barbwire fence around the facility keeps unauthorized visitors at bay. Meanwhile, authorized visitors, mostly the FBI interns, walk around the premises on a regular basis. The visitors look at the dead bodies in a state of decomposition depending on numerous external factors.

Foreign specialists carefully study the findings of the “Farm of the Dead.” There is still a lack of solid scientific research on taphonomy of human remains, not to mention research of the kind backed by alengthy experimental field study. A rather typical incident took place in 2002 when the parents of Daniel Geller, a soldier killed in action, demanded that his body be exhumed and re-examined. The parents suspected that officials at an institute of forensic medicine had removed part of Daniel’s internal organs without getting their express consent to the operation. The body was exhumed two years after the burial. Jehudah Giss, the director of Abu-Kabir Institute of Forensic Examination in Tel Aviv, and Prof. Jurgen Thompson, the pathologic anatomist from Denmark, presented two opposing expert opinions in a court of law. The two renowned scientists argued whether the remains of lungs, liver, kidneys, heart, and tongue might be preserved in the ground under given conditions over a period of two years.

Numerous bodies of the so-called “bog people” have been found in Northern Europe for a long time. The perfectly preserved bodies are discovered periodically in peat moss bogs. The bodies are estimated to be a few hundred years old. Some bodies are thought to be up to ten thousand years old. The bodies’ soft tissues including skin and internal organs are virtually intact due to an acid environment produced by the peat moss, low temperatures, and a lack of oxygen. Scientists even had a chance of studying the contents of the stomachs of the bog people.

However, the finds never had skeletons because of the acids, which quickly eat away the bones. It is quite noteworthy that ancient Europeans e.g. the Celts, were aware of the peat’s preservative properties. At times the Celts buried their dead in the bogs on purpose. They used the marshy environment as natural means of embalming dead bodies.

Professor Rhiner Horn from the city of Kiel in Germany arrived at an unexpected conclusion after watching the decay processes of the exhumed human remains buried over the last three decades. Prof. Horn maintains that a decomposition period of our contemporaries has become much longer. The German scientist cites the following as possible reasons behind the slowdown in decay: the use of a large amount of food preservatives and cosmetics. In other words, people are actually embalmed while being alive.

Getting ready for a transition to another stage that is characteristic of Yoga often leads to a peculiar manifestation of processes occurring in the body after its physical death. Garry Row, a director of a Los Angeles mortuary, observed for 20 days the body of the diseased Paramahans Yogananda. The body had no signs of physical decay, smell or desiccation. Dr. Row was really astounded by the lack of signs of natural decomposition. He made a detailed account of his observations and had it signed before a notary public.