What planetary changes Antarctic iceberg may lead to

The event of planetary importance that took place on the Larsen C Ice Shelf in the Antarctic has attracted global attention. A behemoth iceberg weighing one trillion tons broke off Antarctica. The iceberg is almost 6,000 square kilometers large. 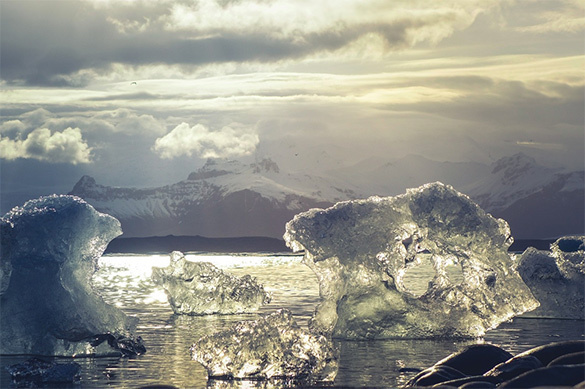 The gigantic chuck of ice, the size of two Moscows, has been put on the list of world's largest icebergs. The separation process started a while back: experts notices first cracks seven years ago. The crack became considerably deeper in 2016, and the iceberg broke off completely on July 10-12.

Such events occur once in every 20 years. Scientists say that the gigantic iceberg will most likely fall apart and then melt during the upcoming several years.

Earlier, it was said that the world was nearing a climate catastrophe because of the melting of Arctic ice. Arctic glaciers, when they melt, release large amounts of methane into the atmosphere, specialists with the Laboratory of Arctic Studies of the Pacific Oceanological Institute said. In annual terms, the amount of methane released during the melting of Arctic glaciers is comparable to that produced by all seas of the World Ocean.

Pravda.Ru requested an expert opinion from Artur Chilingarov, a Soviet and Russian researcher of the Arctic and the Antarctic, a prominent Russian oceanologist.

"The news about the gigantic iceberg that broke away from the Antarctic has produced quite a hype in the world. You say that this is an event of global scale that requires careful observation. Will the phenomenon affect the climate or the currents?"

"I'm sure that it will not affect the currents, nor will it change the climate of the planet. There were other incidents of the kind in the past. Scientists noticed the crack a while back, so they were keeping an eye on the process, it did not come as a surprise. One will need to monitor the movement of the iceberg afterwards. There are different ways available for the purpose, including from space, especially during the Arctic night period."

"What caused the iceberg to separate? Is it global warming?"

"This is a common occurrence. Moments when icebergs appear in the Arctic zone take place periodically. Those ice islands can be different in their size. This one is very large. Scientists from many countries will need to monitor the situation to be able to predict various situations that may occur."

"Yes, the iceberg is as big as two Moscows. There were larger icebergs in the past, 100 kilometers large."

"It was suggested the iceberg should be transported to places that suffer from the shortage of fresh water."

"Yes, it can be possible, there are scientists who work in this area, but this is a global problem that is not easy to solve. First and foremost, we should keep its movement under observation."