Asteroid impact threat: Are we doomed yet?

"Watch therefore, for ye know not the day nor the hour," could be still an actual description of our ability to predict asteroid threats to Earth. The sentence from the Bible (Matthew 25:13) sound like a reminder of a vast number of more than 1,500 currently potentially hazardous objects, floating in space, meandering around in the Solar System. Some of them may be destined to pay our planet a close visit someday, unexpectedly, Chelyabinsk-style, as the one that hit Russia in February 2013, causing serious damages and injuring about 1,500 people. Who would have predicted that? Lately, one of the potentially hazardous asteroids, named 2014 UR116, created quite a buzz when various media reported that the 370-wide space rock may hit Earth. Its impact would cause an explosion 1,000 times greater than the Chelyabinsk meteor. But the discoverer of 2014 UR116, Vladimir Lipunov, a professor at Moscow State University, becalms the public. "This asteroid will not collide with Earth during the next 100 years," Lipunov told astrowatch.net. 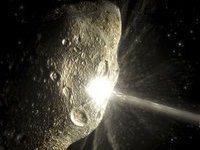 Potentially Hazardous Asteroids (PHAs) are space rocks larger than approximately 100 m that can come closer to Earth than 0.05 AU. Currently none of the known PHAs is on a collision course with our planet, although astronomers are finding new ones all the time.

Lipunov said it is difficult to calculate the orbit of big rocks like 2014 UR116 because their trajectories are constantly being changed by the gravitational pull of other planets. He noticed that the scientists can't say precisely when the asteroid will approach the Earth. "We should track it constantly. Because if we have a single mistake, there will be a catastrophe. The consequences can be very serious," he said in the documentary "Asteroids attack" posted on Roscosmos website.

Are there potentially dangerous asteroids near Earth?

He emphasizes that the asteroid was missed by other, much bigger telescope networks. "It's funny that a much larger telescopes American than our MASTER (robotic telescope), missed such utter lump! The reason is that all previous flybys of the Earth took place during the full moon, when the anti-asteroid system is idle," Lipunov wrote on his blog.

2014 UR116 is often compared to the famous asteroid Apophis which is similar in size and also created worldwide concern when in 2004 the initial observations indicated a probability of up to 2.7% that it would hit our planet. Now, the risk of impact has been eliminated and Apophis is expected to fly-by Earth in 2029 and in 2036.

"I don't think there is any possibility of Apophis striking the Earth in the next few decades, as JPL has shown that it will miss by a safe distance," Gordon Garradd, Australian astronomer, the discoverer of numerous asteroids and comets told astrowatch.net. Garradd has worked for a number of astronomical institutions in the USA and Australia, most recently at Siding Spring Observatory on the Siding Spring Survey, part of the NASA-funded Catalina Sky Survey for near-Earth objects.

Robert McMillan, Principal Investigator of the Spacewatch Project at the University of Arizona is also convinced that Apophis won't hit Earth. He notes that "Its orbit is already tightly constrained by many observations including radar." He adds that any potential debris that could also pose a threat is unlikely to be emitted by the asteroid. Spacewatch Project finds potential targets for interplanetary spacecraft missions, provides followup astrometry of such targets, and finds objects that might present a hazard to the Earth.

Apophis or 2014 UR116 are approximately the size of three football stadiums, but what about the objects big enough to wipe out the entire human population? For example, in August 2014, two 3 km wide asteroid passed by Earth. Luckily, at a safe distance. In February we will see asteroid 2000 EE14, 1.6 km in diameter, but 72 LD (Lunar Distance, 1 LD = 384,401 km, the distance between Earth and the Moon) is safe enough, so doomsday is cancelled.

Good news is that asteroids that big don't fly by Earth very often, but just to make sure and avoid any potential catastrophe, it's better to track them constantly. Just like Lipunov says.