Can man be as fast as cheetah?

What is the maximum human speed? The current record of running at 100 meters distance is currently set at 9.58 seconds. It has remained nearly unchanged since 2009. Some believe that it is very close to the limit of biomechanical human capabilities with current anatomy. However, calculations show that the limit can be pushed. 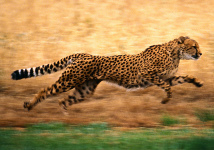 The current world record belongs to Usain Bolt, a runner from Jamaica, who has unique physical characteristics. At this time he has no competition, but scientists are willing to work in this direction. Back in 2008, the Journal of Experimental Biology published the material prepared by Stanford biologist Mark Denny who has been studying the records of 100 meters races set since 1900.

The scientist wrote an equation that models the properties of the curve he created. Toward its end, the curve flattens out, reflecting the approach to the limit of the current human capabilities. The graph shows that the speed limit for a person in 100 meters race can be 9.48 seconds.

This conclusion is similar to the results of the research conducted by Norwegian physicists. They studied the world record in 100 meters race set by Usain Bolt at the Beijing Olympics in 2008. The Norwegians calculated that it could have been not 9.69 seconds, but 9.5 seconds. Creating similar graphs for other runners, Denny found out that horses and dogs have already reached the maximum of their speed. For horses it happened in the 1950's, and dogs reached their limit in the 1970s.

Peter Weyand from the Southern Methodological University noted in his research that the speed of a runner is limited by the intensity with which the athlete pushes himself away from the ground.

According to the calculations, outstanding sprinters put the running power from 360 to 450 pounds per foot in every step. Weyand is convinced that human limbs are capable of reaching a much greater pushing force than that currently observed in straight high-speed running. Besides, humans do not use the most efficient running technique. Among other things, it has to do with the fact that human knees face the "wrong way", which is directly related to vertical positioning.

Experiments showed that during jumping the power of feet hitting the ground is 30 percent greater than the power during running. This allowed Weyand to make a theoretical assumption that utilizing the same power while running an individual can run with the speed of 19.3 meters a second, which means that a maximum speed at 100 meters run can be as low as 5.18 seconds.

However, during running 90 percent of effort is directed horizontally. Only five percent of effort moves an individual horizontally. This means that while running, an individual is jumping like a ball, which lowers his speed. Incidentally, the fastest land animals on earth, cheetahs, transform their powerful push with rear legs into a long flight above ground, which lets them reach incredible speed. They run 100 meters in six seconds.

The research and observations of cheetahs' technique shows that humans have a significant reserve to increase their speed using devices that help to transform the power vector when pushing with feet while running. It can be assumed that devices attached to human feet or something similar to spoilers may drastically increase the speed of movement. These can be anatomical transformers for legs that look like popular Jolly Jumper devices. This is not the best example because these devices increase the power of a push due to springs, only insignificantly changing the power vector after pushing.

In modern sports, one of the main directions in increasing human speed is the work with muscle contractions caused by chemical substances. This is the notorious doping that allows increasing speed but causes negative consequences for human health.

Experts have been saying that sports have turned into a competition among pharmacists. Genetics scientists are also involved in the process and grow species that have certain parameters that exceed those of the average human. However, both groups of scientists face the issue of biomechanical laminations of humans.

Strangely enough, new discoveries should be expected from the disabled. In addition to its humanitarian function, Paralympics play a significant scientific role, stimulating development of efficient alternative and additional anatomical human infrastructure.

Now disabled sprinters compete with prosthetics and gradually approach the maximum speed limits of healthy runners. The day when people with artificial limbs would outrun healthy people is not too far away.