Arctic sea ice will disappear during the summer, scientists predict

New evidence of the effects of global warming point to a future in which there will be no ice in the Arctic during the warmer months of the year. "Not only is the area of ice  smaller, but also its thickness, making the ice more vulnerable to melting in the future," says Christian Haas, a geophysicist at the University of York in Canada.

The Arctic Sea is experiencing a loss of ice at such a rapid pace that the area will soon be ice-free during the warmer months. In comparison with 1980, the volume of water ice in the Arctic is equivalent to only 20% of what was at that time of year.

The data are contained in a report released last week by scientists from various universities. The alarming rate of melting was measured by the European Space Agency satellite CryoSat-2, which uses a new technology to measure the thickness of sea ice and how much of it is covered by water ice.

The loss of ice thickness is more difficult to see with the naked eye, and its scientists worry the decline is too much, that now it must be managed better. "Not only is the area smaller, but also its thickness, making the ice more vulnerable to melting in the future," says Christian Haas, a geophysicist at the University of York in Canada.

The Arctic Sea has reached record levels of loss in 2012, with the lowest recorded amount of ice that covered only half the average area covered between 1979 and 2012. The newly released data confirms previous reports - such as NASA's ICESat satellite from 2003 to 2008 - which also indicated the end of water ice in the Arctic in the warmer months.

Scientists at the Polar Science Center at the University of Washington also released a report with similar predictions in 2012 - for this, they used a technique called Pan-Arctic Ice Ocean Modeling and Assimilation System (PIOMAS).

"As satellite measurements show, not only the area decreases, but its thickness is actually decreasing, making it  increasingly likely that the ice will disappear sooner or later," said Haas.

With this, it would be important to review policies including emissions reductions  made based on more conservative data on melting ice in the Arctic. 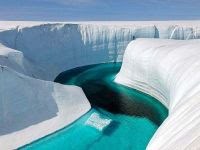