In the Isthmus of Panama, in the archaeological mound of Casita de Piedra, a group of a dozen of stones was discovered. The discovery became the earliest evidence of practicing shamanism in Central America. About 4,000 years ago, the stones were brought here in bags or baskets, which eventually turned into ashes. For which purpose, though? 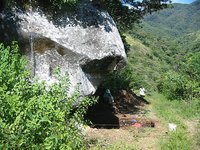 Archaeological excavations in this part of ​​Mesoamerica have been conducted since the 1970s. Originally, experts thought that people appeared there no earlier than 6,500 years ago. However, in 2006, Ruth Dickau of the University of Exeter (UK), insisted the radiocarbon analysis be repeated. As a result, it was revealed that the artefacts found in those places, including kitchen utensils and tools, were no less than 9,000 years old. According to LiveScience, the scientists also paid attention to a group of mysterious stones.

Panamanian historians suggest, for example, that the stones were used in the practice or shamans, or healers. One and the same person could often combine these two roles. Geologist Stewart Redwood, one of the authors of the research published in the latest issue of Archaeological and Anthropological Sciences, said that the stones were transported from the gold mining area of ​​Panama, known as the Cordillera Central. The development of gold mines in that region began 3,000 years before the stones appeared in Panama. However, not even the slightest sign of gold was found on the Casita de Piedra stones. However, the mysterious stones contained inclusions of magnetite. This black mineral has strong magnetic properties, able to deflect a compass needle.

Researchers do not have any evidence to suggest that those rocks were collected, and then transferred during the search for gold-bearing ore. Most likely, we will never know what it was actually done for. Casita de Piedra used to be the home to many Native American peoples: Ngäbe, Buglé, Bribri, Cabécar and the extinct tribe of Dorasque. Shamans or healers (curanderos) often own stones that they use during sacred rituals. Stones with crystal structures were mentioned in myths and legends of contemporary Indians of Central and South Americas.

The first settlers of Casita de Piedra were farmers. They grew maize, cassava and made arrowroot flour. They also collected coconuts, fruits and root vegetables. It is quite possible that they also did hunting and fishing, but fish and animal bones had completely decomposed in wet soil.

One should realize that shamanism has never ever been a religious practice. Shamanism has always co-existed with any small-town, or even global religion.

There were five different perspectives on shamanism. First, it was believed that a shaman was a servant of the devil. Second, shamans were considered fraudsters and charlatans, who played with other people's heads, but could not deceive the people of science. Third, shamans themselves used to say that shamanism was neither a belief nor a religion. According to them, it was a private phenomenon - something like folk medicine, for example.

Fourth, shamanism of Siberian peoples was regarded as degradation of Hinduism, Buddhism, Brahmanism and other religious systems of the peoples of Asia. Finally, with the victory of positivism and materialists, shamanism was seen as a definite stage of development of any religion. The view of shamanism became broader at the end of the 19th century. They started to look at it not as an exclusive belief and ritual practice of the people of Siberia, but as a phenomenon inherent to all people of the world, including Africa and the Americas.