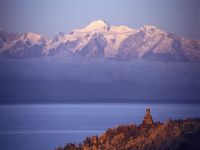 The director of Naval Hydrography in Bolivia confirmed the possibility of declaring a drought alert for Titicaca Lake because its waters are down to only 15 centimeters from the level that would require a state of emergency.

According to the director of the dependence, Jorge Espinoza, this extreme situation presents itself every eight to 12 years, but now it tends to decrease considerably lower with respect to previous occurences.

The phenomenon is related to the lack of rainfall in the region where the second largest lake in South America is located after Venezuela's Maracaibo, and because the river water providers do not fulfill their function for the same reason, lack of rainfall.

The irregularity of the highest navigable lake in the world whose edges border the banks of the territories of Bolivia and Peru, is accompanied by a decrease in the volume of the Desaguadero River.

This irrigates the northern Bolivian elevated plain and is the main tributary of Lake Poopó, the only salt water in the area and situated 3,686 meters high.

The reduction also affects the level of the Amazon river hydrological basins, of the Silver, and of the Beni, which is even more alarming because its waters are eight meters below normal, according to Espinoza.