The amino acid glycine, a fundamental building block of proteins, has been found in a comet for the first time, bolstering the theory that raw ingredients of life arrived on Earth from outer space, scientists said on Monday. 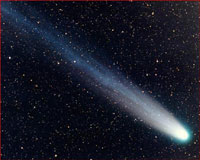 Microscopic traces of glycine were discovered in a sample of particles retrieved from the tail of comet Wild 2 by the NASA spacecraft Stardust deep in the solar system some 242 million miles (390 million km) from Earth, in January 2004, Reuters reports.

NASA's Dr Carl Pilcher hailed the discovery, saying it "strengthens the argument that life in the universe may be common rather than rare."

Many scientists believe that life began on Earth after we were battered by billions of asteroids and comets in the early days of the solar system. All the water in the sea may have come from icy comets, Scientific American informs.

However, "it was possible that the glycine we found originated from handling or manufacture of the Stardust spacecraft itself," according to NASA's Dr Jamie Elsila. The scientists have since carried out isotopic analysis of the carbon in the sample, finding that it contains too much carbon-13 to be from Earth, The Register reports.