China’s nuclear tests could have taken the lives of 1.48 million people

The nuclear tests, which China conducted in 1964-1996 could have taken the lives of over 200,000 people. Soldiers were made to gallop on horseback towards nuclear mushrooms. Many of them died of radiation exposure. Many of them continue to die today. 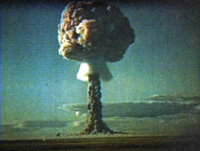 China’s nuclear tests could have taken the lives of 1.48 million people

Japanese Professor of physics, Jun Takada, calculated that up to 1.48 million Chinese could have caught radiation disease and up to 190,000 of them could have died of leukemia and cancer, Infox.ru reports with reference to The Times.

The scientist calculated that the so-called nuclear sands of radioactive dust and particles had reached many towns and villages situated along the ancient Silk Road. Takada found vestiges of the radiation disease near the border territory between China and Kazakhstan, a republic of the former Soviet Union.

Takada concluded as a result of his research that China’s three major nuclear tests exceeded the power of the Chernobyl disaster four times. He interviewed many Chinese nationals who were involved in the nuclear tests. Many of them told the scientist that they were still suffering from the disease, that many of their children were born with either dead or with severe deformities.

That was the price that the nation had to pay for the decision that the Chinese leadership made in 1955 to build a nuclear bomb. Mao Zedong was concerned about the nuclear power of the United States . He also wanted to take advantage of the USSR as world’s number one communist state, the Japanese scientist believes. The first nuclear test was made on October 16, 1964.

Forty-six nuclear blasts were made on the Lop Nur test ground, 1,500 miles west of Beijing. There were 46 nuclear blasts performed there: 23 bombs exploded in the atmosphere, 22 under the ground, and one explosion ended unsuccessfully.

China held its last nuclear atmospheric test in 1980, whereas underground tests were finished only in the summer of 1996. Historians say that the cost of China’s first A-bomb made up a third of the nation’s entire state budget in 1957. Over 20 million Chinese peasants died of hunger that year.