The president of the Academy for Applied Ufology, Academician Vladimir Azhazha, is considered to be the founding father of the Russian ufology. He shared his knowledge of aliens with Mikhail Gorbachev and Boris Yeltsin, who subsequently confirmed his status as the nation’s chief scientist in ufology. The academician has recently marked his 80th birthday and is currently working on an extensive collection of books (ten volumes) devoted to UFOs. 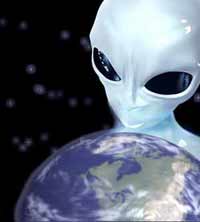 It goes without saying that the traditional science does not treat ufology seriously. Vladimir Putin once said that he never believed in extraterrestrial beings.

“Putin is a secret service man. Mikhail Gorbachev was the first and the last national leader who acknowledged the issue of unidentified flying objects in Russia. We established the public ufological center during his rule under my supervision. Thousands of ufologists were working for me from 1990 to 1995. We collected tons of information to prove the existence of UFOs. There are other civilizations in the universe, no matter if we want it or not,” the scientist said.

“The term ‘extraterrestrial’ is not quite correct. There is no evidence to prove that aliens come from other planets. No one knows where they come from. It is not ruled out that they come from a civilization of parallel worlds, or from the ocean. Modern science knows very little about what’s happening at ocean’s depths,” Vladimir Azhazha believes.

“There were incidents when scientists saw unidentified objects in the Mariana Trench. I am a submariner myself, although I have never seen something like that. We once encountered an unusual animal in the ocean, although we failed to determine and classify the being. It was a lyre - shaped creature .

“US satellites took several infrared photographs of Mexico, Chile and Bolivia in 1993. The pictures showed large objects up to 450 kilometers in diameter – the flying cities. This is where they all come from.

“You probably realize that I do not feel like fantasizing at my age. My facts show that aliens use fresh water as fuel for their aircraft. They decompose water into oxygen and hydrogen. In Australia, a UFO was once spotted landing on a tank holding 38 tons of water. When it took off, there was no water found in the tank. There was a smell of ozone in the air, which made it clear that they decomposed water into oxygen and hydrogen and compressed the latter under the pressure of several hundreds of atmospheres. We won’t be able to carry a bucket of mercury, because it will weigh 130 kilograms. If we compress hydrogen, a truck won’t be able to move a spoonful of it.

“There are many UFO bases in Russia. Many of them can be found in the area of Ladoga Lake and Baikal Lake, as well as on the Kola Peninsula. There are many bases in the Pyrenees and in the Himalayas.

“Aliens can control the human mind. They may at times abduct humans to implant tiny chips in them, although we do not know why and what for they do this. Such a chip was found in Napoleon’s skull when French researchers were allowed to exhume his grave. A further investigation into his biography showed that artillery captain Napoleon left his unit for several days and failed to explain his absence to the commander. He became a general and then an emperor soon afterwards.

“It is not ruled out that other prominent world leaders, Winston Churchill, for example, also had such chips in their heads.

“I do not really know what attracts aliens to us. It’s good to see that they have not been showing any aggression yet, although they could relieve the planet of mankind within only one hour. Flying saucers can be found on the rock carvings of Neanderthal men, and the saucers have not changed since then. If aliens wanted to study us, they would have studied everything about humans already. They do not need to explore us, they have a different purpose. I would pay more attention to abduction. They take human eggs and sperm. There were many incidents when abducted women were pregnant after their return. I think that the hybrids that saw the light as a result of sexual contacts with the aliens can live among us. Michael Phelps, who won eight medals at the Beijing Olympics, could be one of them, why not?”