2005 ends with political success for Russia

The year of 2005 turned out to be dramatic and restless. Russia's foreign policy has registered more active dynamics. Experts state that in 2005 Russia faced not only problems on the international political scene. It is important that Russia succeeded to prove its case as concerning some issues and even made good progress in some directions.

Editor-in-chief of the Mezhdunarodnaya Zhisn (International Life) magazine Boris Pyadyshev says that at the end of 2004 Russia's foreign political situation was rather distressing after a coup in Ukraine. At that time, declaration of Ukrainian politicians sounded disappointing and alarming. The same situation occurred in Georgia where the anti-Russian stance turned out to be even stronger. Moldova president also abstained from cooperation with Moscow. Beralus president failed to establish a constructive dialogue with Russia. In 2005, the RF Government's policy, businessmen and the society made reasonable efforts to change the situation for the better. Festivities dedicated to the 60th anniversary of the Victory Day became the occasion for outstanding world politicians to come to Moscow. The 60th anniversary of the UN foundation was also a remarkable event. The UN summit last autumn in New York demonstrated that Russia is still one of the most authoritative and respectable countries of the world. 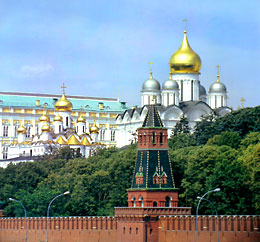 In 2005, the US and Russia managed to keep up constructive relations. Condoleezza Rice said that the USA was slightly anxious about the methods Russia prefers on its way to democracy. The US Secretary of State implied the concentration of power in the Kremlin and the state of free press in Russia in general. Still Ms. Rice emphasized that the US administration intended to maintain constructive relations with Russia.

Russia's human rights ombudsman Vladimir Lukin says the relations between Russia and the USA can be defined as “rivalry – partnership”. However, this Cold War politics rudiment, the Jackson-Vanik amendment, still mars the bipartite relations. Economic relations of both countries are affected by the political climate.

Nowadays, USA's domestic and foreign policy plans are placed in the forefront. Against the background of the protracted and very expensive process of establishing democracy in Iraq and the sweeping natural disasters last summer, Americans insist more and more that “US Government must be brought back to the US territory.”

Director of the Moscow department of America's Heritage Foundation Yeugeny Volk says that Iran and Russia's nuclear cooperation with Teheran is the number one problem in the relations between Russia and America. “It seems to me, Iran is inclined to lead Russia by the nose as concerning the guarantees of the military purpose of its nuclear program.” The Russian-American contradictions in Central Asia are in the focus today. When maintaining cooperation with China, Russia indicates its political line to force Washington out the region that Moscow believes to be the traditionally Russian authority. Moldova, the Baltic republics or Transdniestria - in every region the interests of Russia and the US come into collision, the expert adds.

As for that past year in Europe, Chairman of the RF Duma Committee for International Affairs Konstantin Kosachev says the year of 2005 was Europe's failure as concerning European integration. The European Union faced several problems with the constitution and the budget when planning to admit new members to the EU. It is obvious that adoption of Central and Eastern European countries to the organization makes it weaker. In 2005, Russia and the EU agreed that their cooperation would be aimed at visa-free travelling for their citizens. Unfortunately, the European Union still applied its double standards politics in the sphere of human rights and its estimation of elections. Brussels disregarded the situation of Russian-speaking population in the former Baltic republics. The EU did not support Russia's idea to establish common clear criteria for estimation of the election process. The problem of transit through Kaliningrad is not yet solved.

In an interview to the Vremya Novostei newspaper EU Secretary General Javier Solana said the European Union kept on living and functioning. “It is not in crisis at all. It is still an important figure in the international team. Debates on the European constitutions will continue in the first half of 2006. This will allow estimating the situation by the end of the first six months of 2006,” he said.

Vladimir Lukin believes that EU's plans to expand the organization resulted in bewilderment and confusion. “It is obvious that political integration of Europe slowed down in 2005. The festina lente slogan is vital even in the globalization epoch. Conditions make Europe give up illusions. There should be more realism in the relations between Europe and Russia.”

German Interior Minister, deputychairman of the CDU faction in the Bundestag Wolfgang Schaeuble believes Frau Merkel and President Putin will establish good relations. “The history of Russia-Germany relations demonstrates that good relations with Russia serve not only the interests of Germany but those of entire Europe,” he said on April 7, 2005.

Director of the information and press department at Russia's Foreign Ministry, Mikhail Kamynin, says that in 2005 it became clear that the 2004 expansion of the European Union to 25 members resulted in positive and negative consequences for Russia. Unified customs tariff, lifting nontariff restrictions and others are a positive result. At the same time, visa introduction, diversification of sources of energy supplies by new EU members and introduction of EU anti-dumping procedures in these countries as concerning Russia are the negative result. The European Union today is a more awkward organization.

The situation in the CIS draws attention of many politicians today. Belarus Foreign Minister Sergey Martynov says the present-day situation reveal that relations between Russia and Belarus are developing in the right way, gaining more importance and substantiality. “And this is not connected with orange revolutions on the territory of former Soviet republics. Strengthening of relations between both countries are the result of mutual efforts of leaders of these countries,” he adds.

At the same time, anti-Russian attitudes are gaining force in Georgia. Georgia Parliament Speaker Nino Burdjanadze says Georgia sometimes experiences quite serious problems caused by Russia. “My opinion of Russia's policy in Georgia and in the Caucasus in general is harsh,” she states.

In 2005, Russia made important steps towards Asia. Deputy Director of the Russian Academy of Sciences' Orient Institute Vladimir Portyakov says that a mutual report on problems of Russia-China trade and bringing it to the volume of $60-80 billion (according to provisional estimates, the volume of trade between both countries made up $29 billion) were really important events of the year. The report was the first document of this sort in the relations between Russia and China. The recent ecological disaster in China just proved that both countries were interdependent. The year of 2006 is the year of Russia in China which is expected to put an end to suspicions, strengthen friendship and cooperation. Russia pays more attention to the Asian vector of its politics now.

Mikhail Kamynin adds that an additional agreement on the eastern sector of the frontier between Russia and China is a wonderful solution of the frontier problem. So, both countries have no more big political problems in their mutual relations.

In April 2005, Russia President Vladimir Putin visited Egypt, Israel and Palestinian Autonomy for the first time. Israel Foreign Minister Silvan Shalom welcomed the decision of the Russian president to visit Israel. “Both countries maintain good steady relations which will be even strengthened in the future,” he said.

President of the Russian Center for Strategic and Political Research Vitaly Naumkin says that Iran and Turkey are Russia's largest partners. But Russia's role in the Arab world including the Mideast peace process is still insignificant.

Many experts are making political forecasts as concerning the coming year. In 2006 Russia will be in the chair not only in G-8 but also in the Black Sea Economic Cooperation Organization, in the Arctic Council. Starting with May 2006, Russia will be the chairman in the Council of Europe Committee of Ministers.

Research Manager at the Globalization Problems Institute Mikhail Delyagin says that Russia will experience quite obvious consequences of high oil prices. On the one hand, the onflow of petrodollars will even corrupt the Russian elite and the government even more. On the other hand, developed countries will shut the eyes to any faults of Russia's domestic policy in exchange for stable supply of Russian energy resources and broader control over Russian energy resources. This so-called pact “oil for silence” became evident when criminal proceedings against YUKOS were initiated. If so, the government may not fear that it will be bothered in connection with the Chechnya war or some democracy troubles in the country.