Russia needs no lessons of democracy from USA

Half of the Russians would not mind some countries help other countries promote democracy. But the number of those who want to be taught democracy by the U.S. administration sharply decreases when it comes to specific U.S. assistance, according to an opinion poll conducted by VTSIOM. 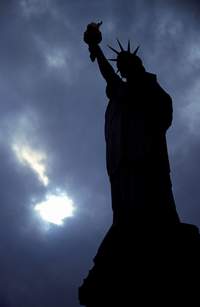 It seems that the sentiments were taken into consideration by members of the work group preparing for a second reading of a contentious bill on nongovernmental organizations in Russia.

The survey conducted by VTSIOM shows that 70% of the youth from 18 to 24 years old are happy about foreign teachers of democracy. From 53% to 56% of the middle-aged and senior citizens are in favor while 26% of the polled strongly object to foreign assistance in the promotion of democratic values. The figures change when America is mentioned as a democracy teacher for Russia. Every second respondent is against the U.S. assistance to Russia in terms of democracy promotion. Every third one is in favor. The pros and cons among the youth are 46% and 42% respectively. The United States should focus on the assistance to Russia's social sector, according to 26% of Russians who approve America's helping hand. About 20% of the respondents believe that the United States should help Russia just because the former is a rich country while the latter is a poor one. Seven percent of Russians believe that their country has no funds of its own to promote democracy. Three percent sees the U.S. democracy as an example to follow.

The older the respondent, the more negative he or she gets toward the U.S. assistance. The arguments cited by the opponents are as follows: “Russia will have to pay back for this assistance,” “Russia has enough money to promote democracy,” “the United States should not interfere in Russia's internal affairs on the pretext of helping democracy.”

However, the United State has already allocated $4 million for the development of public organizations in Russia. The House of Representative of U.S. Congress has recently passed a budget bill “On the allocation of funds for foreign operations, funding of export and related programs.” The bill provides for $95 million to be allocated to the National Endowment for Democracy, which is responsible for funding “international programs to promote democracy, good governance, human rights, independent media and the supremacy of the law.” Russia sits in a group of recipients along with the third-world countries like Iran, Syria, Venezuela, and North Korea.

U.S. lawmakers paid no attention to President Putin's tough stance on foreign funding of Russian public organizations. Delivering his Address to the Federal Assembly last year, he accused part of human rights activists of “rendering services for the sake of dubious group and commercial interests.” President Putin did not mention any names, though. In July this year Putin objected categorically to foreign funding of political activity. “Not a single state that respects itself does that, and we won't allow it either,” said Putin at the time.

The State deputies picked up the president's message and produced a bill on NGO's that would ban the activity of representative offices and affiliates of foreign NGOs in Russia. The bill would require NGOs to register with Justice Ministry and empower authorities to demand access to financial and economic documents to check that NGOs do not use foreign grants for financing political activities.

A first-reading approval of the bill has caused a scandal. Human rights activists, the Public Chamber, and the Western public have expressed objections. U.S. Administration Commission for Security and Cooperation in Europe forwarded a letter to the Duma Speaker Boris Gryzlov. The letter warned the bill would bring about negative consequences if signed into law.

Consequently, a second reading of the bill was postponed for 2 weeks. Sergei Popov, chairman of the Duma committee for public and religious organizations, said that the final version of the bill would not allow the authorities to check on NGO's financial documentation. At the same time, the Justice Ministry will have the right to request an NGO for the submittal of “documents regarding an NGO's activities” once a year. The Justice Ministry will also have the right to seek cooperation at the tax collection service and the financial monitoring service “if cooperation deemed necessary.”

The amendments are expected to be approved by the committee for public organizations. The bill will pass the Chamber on December 21st. The State Duma deputies met some of the recommendations of the Russian public. And the public are not against the foreign assistance to Russia. The survey shows that Russians normally do not approve the meddling of foreign states (especially the United States) in Russia's internal affairs.