The West will never let Russia rule the world

The high level meeting of eight world leaders, known as the Group of Eight, started on June 6 in Germany. Representatives of other highly developed countries will also attend the forum. The main topics on the agenda of the summit include economic issues, climate change and the situation in Africa. 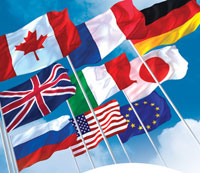 The West will never let Russia rule the world

Russian scientists of politics share their opinions with Pravda.ru regarding the agenda of the G8 summit in Germany and the possible pressure on Russia.

Sergei Markov, the Director of the Center of Political Research:

“The anti-Russian criticism at the summit will be minimum. The world affairs are not about Russia at the moment. They will probably touch upon the most talked-about issues, like the case of Litvinenko’s poisoning. However, British officials have recently stated that they were not going to aggravate their relations with Russia. It will be just a regular G8 summit, where Russia will not be the center of attention.

“There is no single approach as far as Iran as concerned. No one is willing to claim responsibility for Iraqi affairs. The USA will definitely ask for help from the international community, but it is not going to happen in the near future. Russia will obviously raise the question of the air defense system in Europe. However, there is no unanimous approach to this problem either. It will only be a preliminary discussion of the issue.

“Two other key issues which Germany put on agenda of the summit – the general development of world economy and the situation in Africa – are not going to bring out anything new. There will be something on Kosovo, although it is not clear what they are going to discuss in particular. Russia may continue the criticism of US foreign policies, like Putin did it in Munich, although I do not think that it will go too far. It will just be a regular summit.”

“Of course there will be criticism against Russia. The question is how harsh it is going to be. Unfortunately, the relations between Russia and the West have been worsening lately. They do not want to listen to Russia in the West, they do not understand what we want. On the other hand, we cannot break the wall of misunderstanding either.

“Russia will not sit on its hands. Putin will respond to those attacks because his presidency is drawing to its end. I believe that the talks during the G8 summit will be rather complicated, but there will not be any ground-breaking decisions made. The summit will end without any positive results, because the West does not want to accept Russia in its club of world leaders. The West is ready to give us a credit as a fuel supplier, but nobody will let Russia rule the world. I believe that this is the biggest mistake, which the Russian administration has been making for years.

“Of course there will be a dispute on the subject of air defense. US officials are certain that their stance on the matter is absolutely transparent. I am not sure if they are sincere about that. They say that they want Russia to be a strong, prosperous, democratic country, although it is impossible to understand what they mean. This is a game of word and action when they say one thing but do something completely different. The USA definitely does not want Russia to be strong – no one wants a strong competitor. I think that there is another serious problem to that. The West does not realize that it is historically doomed to cooperate with Russia if it is willing to protect its south-eastern borders. If the West does not want to understand that, it will have to deal with a threat in that direction.”

Vladimir Zharikhin, Deputy Director of the Institute for Commonwealth of Independent States:

“The official agenda of the G8 summit does not stipulate the discussion of moot questions, which Russia and the West have. However, the world leaders will definitely discuss controversial questions during the talks. I think that the West will try to convince Russia to turn a blind eye on the deployment on US radar systems in Europe and not to veto the resolution on Kosovo. Putin is not going to succumb to this pressure, judging upon his recent interview.

“The Group of Eight is not arranging this meeting to discuss Russia. They have a variety of their own problems, like, for example, the unstable dollar, the situation in Iraq and Afghanistan, the stable position of the Chinese currency, and so on and so forth.”