Corruption is like an insurance technique, which businessmen have to pay for their security

“The Bribe of the Year” operation took place in Moscow's Baltschug Kempinski Hotel on Monday. A million dollars cash – this is the amount of the bribe, which deputy chairman of the Credit Organizations Administration with the Russian Federal Fiscal Service, Oleg Alekseyev, received during the operation. The official did not have a chance to enjoy the money, though. Investigators found out that the official was asking for bribes even if he did not promise to solve the problems of a credit organization completely. 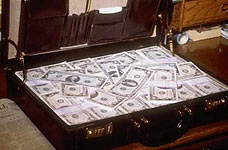 Police officers found three cases in his office, in which another million dollars of bribes was resting. One of the Moscow bankers reported extortion to the police: the banker said that Alekseyev was asking for a bribe in return to his services to eliminate tax claims, which had been unveiled during a fiscal inspection. The sum of the claims evaluated at $50-60 million. A bribe usually makes up one-tenth of the supposedly unpaid funds. The official told the banker to pay him a million dollars for an official document, which would say that the found claims were not to be treated as serious.

The chairman of the Russian Anti-Corruption Committee, Anton Belyakov, stated that bribes may vary in Russia from $100 (to a police officer) to $20 million (to acquire the official position of a governor). “A bribe can be received in cash; it is possible to make a bank transfer too. An official can also be bribed with property such as an apartment, a car, expensive furniture, or a trip abroad. Cash is the most secure form of a bribe: other ways of bribery can leave traces – documents. Furthermore, Russian banks have increased the cash interest from 1.5 to 8 percent,” Belyakov said.

The average amount of bribes on the business market of Russia has increased to $135,8 thousand. A successful Russian businessman has to pay about $243,7 thousand of bribes a year as opposed to $23,000 in 2001. The Russian market of bribes is evaluated at some $316 billion a year.

The organization has recently presented the index of corruption in governmental agencies of the world. The index is based on the extensive research, which Transparency International conducted during the recent three years. Iceland, Finland, New Zealand and Denmark were listed as the states with the minimum level of corruption in official circles. Russia took the 126th place among 159 countries on the list, having shared the position with Albania, Niger and Sierra-Leone.

Russian experts believe that officials start taking more because they are not certain of their future. “When you don't know how long you can keep your position, you want to take as much as you can,” expert Aleksey Kozhevnikov said. “There are a lot of decisions, which can result in either immense losses or considerable profits for companies, that is why the price of the question has increased so much,” an official from the Russian Ministry for Economic Development and Trade said.

Economist Igor Nikolayev is certain that anti-corruption agencies can only generate higher bribes, even if they try to work hard to reduce the level of bribery. Corruption is like an insurance technique, which businessmen have to pay for their security.