The USA continues investigating the abuse that occurred during the implementation of the UN's Oil for Food program. The committee for investigations and internal security of the US Senate released a statement of new accusations today, which added Russian officials to the list of suspects, involved in the financial abuse. 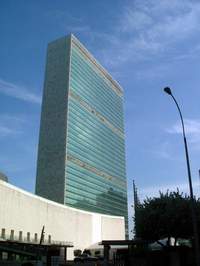 The statement particularly runs that former chairman of the Russian presidential administration, Alexander Voloshin, and deputy chairman of the Russian parliament, Vladimir Zhirinovsky (the leader of the Liberal and Democratic Party), received oil-trade vouchers from Saddam Hussein in return to their promise to support the then Iraqi government. The Russian politicians supposedly sold the vouchers in the sum of 16 and 8.7 million USD to the American company Bayoil, the head of which, David Chalmers, is already listed as a defendant on the case of the UN's Oil for Food program. The report also cited the former vice president of Iraq, Taha Yassin Ramadan and deputy prime minister of the country, Tarik Aziz, as the evidence to prove Russian officials' guilt.

As a result, Russian politicians have a rather respectable company on the bribery case. English and French officials have also been accused of committing a similar felony: a member of the House of Commons of the British parliament, George Galloway, and French Senator Charles Pasqua. US officials say that the above-mentioned political figures received vouchers from Saddam Hussein for 20 and 11 million barrels of the Iraqi oil in return to lobbying Hussein's interests in the UN. Both the British and the French politician have received invitations from the US Senate to attend the hearings on the case. Galloway is expected to make a speech to the US Senate to clarify the case. It goes without saying that the British politician does not intend to plead guilty. It is worth mentioning that George Galloway used to be one of the thoroughgoing fighter against the US-led incursion in Iraq. He was even expelled from the Labour Party for that.

The UN Secretary General Kofi Annan was accused of corruption too, although Annan managed to rehabilitate himself.

Both Russian and European politicians, whom Washington listed as bribe-takers in the case of the UN's Oil for Food program, supported Saddam Hussein's regime and harshly criticized the bombing of Baghdad. The accusations from the US administration are most likely aimed against the UN, first and foremost, under the aegis of which the humanitarian program had been conducted. An oil scandal will become a good reason for the USA to discredit the United Nations Organization and reduce its political importance in big politics. To crown it all, the scandal is taking place on the threshold of the UN General Assembly.