Western mass media get into the mess with Russian corruption

We are used to the fact that Western media outlets may frequently disregard the rules of elementary journalistic ethics, portraying the poor state of things in Russia. There were no doubts that a new report from Georgy Satarov's Indem Foundation “About the increase of corruption over four years” would become the central subject of discussion in foreign press. This is exactly what happened, in a classic form: the truth of the figures was not called into question at all, in spite of the fact that many Russian experts pointed out the inadequacy of numbers in the research. 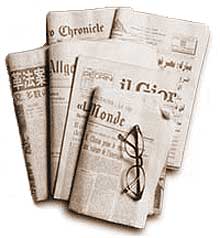 According to the above-mentioned report, the volume of corruption in Russia has increased 11 times from 2001, when the previous research was conducted – from $33.5 billion to $319 billion. This number doubles the federal budget of Russia and makes up almost 50 percent of last year's GDP.

Such a huge number is based on two categories: common people's briberies and illegal extortion of business officials. It just so happens that Russian citizens pay off only hundreds of millions of dollars, which is a meager sum of money in comparison with the value of bribes in total. As it turns out, finding a job or avoiding dismissal in Russia costs up to $500 and more. It has been “meticulously calculated” in the research that the number of such bribes is evaluated at $143.4 million a year.

Indem ascribed the lion's share of bribes to Russian officials, though. They are involved in $316 billion of all bribes, the research firmly says. This figure exceeds the budget of the Russian Federation 2.66 times. It also equals almost a half of the Russian GDP in 2004. Such a calculation has been based on the opinion poll conducted with 2,000 potential bribers among common Russian citizens of the full legal age and over one thousand entrepreneurs. It appears that Indem's researchers multiplied their results by the entire population of Russia.

It is an open secret that there are a little bit more than one million officials in Russia. It just so happens that each of them became $300,000 richer last year. It goes without saying that many officials would not be able to obtain such money. It would be logic to presume that some officials amassed millions of dollars.

Experts immediately cast doubts on the conclusions of Indem's team of researchers, on both large and small figures. A source that wished to remain anonymous told Pravda.Ru that bribes on education do not have any comparison. The Moscow State University does not hold foreign language oral exams for five years already, although bribes used to be the highest on those exams.

Mikhail Grishankov, the chairman of the State Duma anti-corruption committee, was more specific during his interview with Pravda.Ru:

”The figures, which were published in the report from Indem, have been entirely fabricated. The level of bribes cannot exceed the state budget twice. No one can give precise numbers, I would be more careful about them,” the deputy said. “The numbers are high indeed, but the estimation criteria are different. They depend on political engagement. Georgy Satarov, a former advisor of Boris Yeltsin, is eager to show that everything was better in Russia when Yeltsin was at power. The fact that British newspapers distributed this information proves that they only wanted to criticize Russia as their bosses ordered them. I would like to emphasize that the number of scandalous anti-corruption criminal cases has increased greatly in Russia when Vladimir Putin took the office. Authorities started fighting against corruption in politics, law-enforcement agencies and higher education institutions. Criminal cases have been filed against several governors and high-ranking officials of the Russian government,” Mikhail Grishankov said.

It is noteworthy that no one conducted any works to explore the scaleof corruption in Russia during Boris Yeltsin's regime.

Ivan Rodionov, the Managing Director of AIG Brunswick Capital Management (the Moscow office) said in an interview with Strana.Ru that the numbers of Indem's report were nothing but a PR action.

”This is all rubbish, I cannot agree with that. We have information about our consuming budget and about the market turnover. This quite big money for foreign banks, the money would be noticed there, although I can't connect the dots here. They only want to attract people's attention, this action has purely PR goals. I do not treat all this negatively, though, it is a normal PR campaign,” the expert said.

Unfortunately, the format of this article does not allow us to present all expert commentaries regarding Indem's research. We just would like to notice that Mr. Satarov will have to take much efforts to rehabilitate his reputation.

However, obvious discrepancies and the unanimous opinion of the Russian expert community did not confuse the Western press. The Independent, The Guardian and Financial Times synchronously published their “horrible Russian corruption” stories. “Massive scale of corruption in Russia revealed” (The Independent); “Cost of bribes soars as Russia's millionaire bureaucratsrake in profits” (The Guardian); “Bribery in Russia up tenfold to $316bn in four years” (Financial Times).

On the one hand, it has all become rather boring. Any negative information from Russia is presented in the Western society as the ultimate truth. Western mass media beat Soviet television at this point: Soviet news reports about events in the Western community were filled with messages about natural disasters, poverty and unemployment.

Traditions of the Western press and its standards are often pictured as the model of journalism, which implies the many-sided coverage of any problem. Where does their celebrated objectivism go when they report about Russia? Don't they have their own specialists on Russia? Or maybe they do not have a calculator to calculate Russian macroeconomic indexes and compare them with results of Indem's report?

It is worth mentioning that the research was announced on July 20th both in Russia and abroad. The peak of publications took place on July 22nd. One shall assume that two days were not enough for Western reporters, for they simply enumerated brightest moments of the research. Didn't they have time to listen to Russian experts or, at worst, read comments on the Internet?

The one-sided presentation of the research that disgraced Russia produces a supernatural effect in Financial Times. This world-known economic journal earned its authority with the ability to analyze and compare facts. The professional level of the newspaper's analysts and reporters has apparently vanished this time. Why couldn't FT journalists compare the volume of bribes from Russian companies with their overall market value? Several questions would become clear in this case. It is obvious that Russian business cannot pay its own price of bribes to officials! The overall market value of Russian enterprises makes up about $350 billion, whereas Indem talks about $316 billion of bribes.

No one will accuse certain Russian websites and media outlets, which exist at the expense of disgraced oligarchs, of their political engagement. Such webpages and newspapers execute orders to cast slurs on the Russian state and its administration. This is their work to make their own living, but no one expects comprehensive and trustworthy political or economic information from them. Liberal tabloids, so to speak.

Quite on the contrary, globally recognized newspapers and magazines should obviously stay away from such blatant lack of professionalism. It goes without saying that the information must be presented from complete, objective and many-sided perspective. Didn't you urge your colleagues all over the world to respect readers?