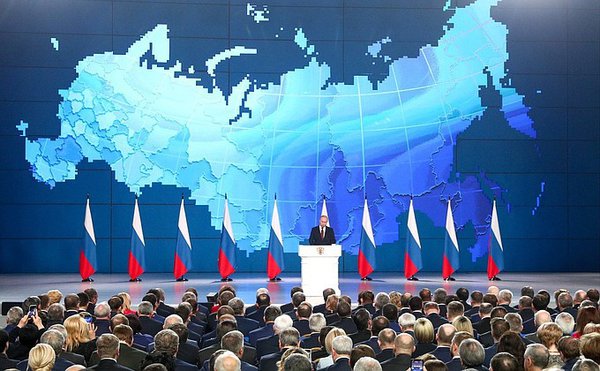 Unlike last year's speech, in which Putin presented Russia's new outstanding developments and achievements in the field of defence, his present address was expected to be people-oriented. Putin's ratings have been declining as citizens are tired of waiting for the authorities to deal with a plethora of social and economic problems in Russia. Indeed, in the beginning of his speech, Putin declared that it was necessary to focus attention on internal issues of the country's development. According to him, all Russians will see improvements already in the coming months. About 95% of Putin's Address to the Federal Assembly was devoted to social issues, but he also spoke about Russia's military power, her state-of-the-art weapons, and did not miss a chance to intimidate the United States.

"For people, it's important what is being done and how it can improve their lives, the lives of their families - now, rather than sometime. We don't need to repeat our mistakes of past decades and wait for the advent of communism. We must change the situation for the better, and the work of executive authorities at all levels must be coherent, meaningful and vigorous. It is up to the Russian government to set such a tone," Putin said.

About 19 million Russians are living below the poverty line now, and this is too much, Putin said.

"Solving demographic problems, increasing life expectancy, reducing mortality are directly related to overcoming poverty. Let me remind you that in 2000, over 40 million people were living below the poverty line. Now it is about 19 million, but this is too much still," Putin said during his annual Address to the Federal Assembly.

The President said that he knows that citizens of Russia have to save on most essential things, such as clothes, medicines and even food.

"In the near future, already this year, we should see real changes in people's assessments of the situation. Early next year, we'll summarize first results of the work on national projects," Putin said.

The president proceeded to specific tasks that the Russian authorities are facing. According to him, the key objective is to protect people and support families.

"Russia has entered a very difficult demographic period. The birth rate has been declining. The reasons behind this are purely objective. They are associated with enormous human losses and failures that our country suffered in the 20th century, during the Great Patriotic War and during dramatic years after the collapse of the USSR. We were able to reverse negative demographic trends in the early 2000s, when the country was in a very difficult situation, when it seemed that it was impossible to do anything, but we did it. We can do it again - to make the natural population growth resume by 2023-2024," Putin said in his message to the Federal Assembly.

Speaking further about the need for social changes in Russia, Putin noted the following:

- social allowances for children and for disabled individuals will be raised;
- property tax exemptions for families with children will be raised;
- mortgage rates will be below 8%, whereas special benefits will be provided for families with children;
- large families will receive 450 thousand rubles to pay off their mortgage. Thus, taking into account the maternity capital, they will receive more than 900 thousand rubles to pay off the mortgage, which is a significant part of the apartment value in most regions of the Russian Federation.

The President also drew attention to the need to immediately index pensions and annual cash payments beyond the subsistence rate.

In conclusion, Vladimir Putin threatened the US leadership by saying that Russia's new missiles will be able to reach Washington and New York. However, Putin noted that Russia was not interested in confronting the United States. Russia is not a threat to the US  - instead, Russia wants to have equal friendly relations with Washington. He urged the White House to abandon illusions about gaining global military superiority.

Putin said that Russia's new weapons, about which he spoke in his Address to the Federal Assembly in 2018, were capable of ensuring "unconditional security" for Russia.

Russia is ready to take mirror and asymmetric measures should the US deploy medium- and short- range missiles in Europe.

"Russia does not intend to be the first to deploy such missiles in Europe. If they are made and delivered to the European continent - and the United States has such plans, in any case we have not heard rebuttals to that -  this will sharply aggravate the situation in the sphere of international security and create serious threats to Russia, because it takes some of those missiles 10-12 minutes to reach Moscow. This is a very serious threat for us. If it happens, we will be forced, I want to emphasize this, we will be forced to take mirror and asymmetrical measures in response," Putin said.