On March 1, Russian President Vladimir Putin started his traditional message to the Federal Assembly. As it could be seen in the beginning of the speech, Putin has not recovered from cold that he caught in the middle of February: he would often wipe his nose with a handkerchief, clear his throat and his voice is husky. 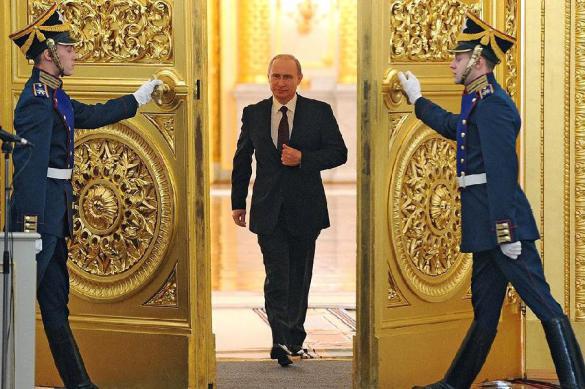 This year's Address to the Federal Assembly has become the 14th for Putin and the 24th in the modern history of Russia. In 2018, the format of the event underwent a number of important changes in connection with the presidential election in Russia, which will be held two weeks after today's speech.

This year's speech is addressed to all citizens of the country, rather than to the political elite.
Secondly, most of the speech is devoted to how, according to the Kremlin, the next six-year rule of the current president will or should look like. Thus, Putin's Address to the Federal Assembly becomes his pre-election message. Thirdly, screens with infographics, diagrams and other visual presentations will be used for the first time to better visualise Putin's words for the population of Russia. Finally, this years's address has been relocated from the Kremlin's St. George Hall to the Central Exhibition Hall "Manege" outside the Kremlin walls that many associate with the inaccessibility and remoteness of power from the people.

"It was at such turning points when Russia has repeatedly proved its ability to develop, upgrade, develop lands, build cities, conquer outer space, make grandiose discoveries," Putin said. "This constant aspiration for the future, the fusion of traditions and values, has ensured the continuity of our thousand-year history. We have also been through large-scale complex transformations, we have been able to cope with completely new and very complex economic, social challenges, and we have  preserved the unity of the country and established ourselves as a democratic society on a free, independent path. "

"Stability is the basis, but not a guarantee for further development. We have no right to let the achieved stability lead to complacency, given that we still have to work a lot to solve many problems," he said.

Russia is one of the leading powers with a defence and economic potential, but from the point of view of people's well-being, there is still a lot to be done. The welfare of citizens is the main and the key factor of Russia's development. "Our priority is the well-being of the people, we must give decent work to people," the president said, adding that as many as 20 million Russian citizens face poverty.

The President set the task to reduce poverty twice in Russia within the upcoming six years. "We must solve one of the key tasks for the coming decade - to ensure a confident, long-term growth of real incomes of citizens, and halve the level of poverty in six years," Putin said.

"Today we are obliged to set ourselves a goal of a fundamentally new level: by the end of the next decade, Russia must confidently enter the 80+ club of countries where life expectancy exceeds 80 years. They are such counties as Japan, France and Germany," said Putin. In today's Russia, life expectancy has increased and currently makes up 73 years. "This is not enough, of course," Putin said.

For the dynamic development Russia should expand space of freedom in all spheres and strengthen institutions of democracy.

"To move forward, to develop dynamically, we must expand space of freedom in all areas. We must also strengthen institutions of democracy, local government, the structure of civil society and courts," he said adding that Russia should be open to the world, to new ideas and initiatives.

Russia needs to ensure the dynamic development, in which no obstacles can stop the nation from moving forward confidently.

The coming years will be decisive for the future of the country, Putin said. It goes about the development of technology. Lagging behind in the field of technology is unacceptable, the head of state said, because technological backlog entails risks of the loss of sovereignty. "They are waiting for a strong response from us, and we are ready to give such a response," Putin said.

Those who can not take advantage and use the technological wave will drown, the Russian president said.

The Russian president ordered regional authorities to improve the condition of roads.

"We need to double the spending on building roads," Putin said adding that eleven trip ion rubles are to be assigned to finance road construction in Russia.

Pensions should be regularly indexed to exceed the level of inflation, Russian President Vladimir Putin said in his annual Address to the Federal Assembly.

He also pointed to the need to improve the quality of medical and social services for older people, to help those who was left alone and found themselves in a difficult situation.

Putin set the goal to increase healthcare expenditure to five percent of GDP using sources of financing that would not restrain economic growth.

"In 2019-2024, the development of the healthcare system from all sources will require an annual average of more than 4% of GDP, but we must certainly strive for 5% of GDP," Putin said.

The Russian authorities will support initiatives that will allow cities to reveal themselves in a new way. Special attention will be paid to social and infrastructure projects, Putin said.

Russia should become one of the world leaders for processing and storing large amounts of information, said Russian President Vladimir Putin.

"With the help of advanced communications, we will open all possibilities of the digital world to our citizens, and this is not only about modern services of on-line education or telemedicine, which in itself is extremely important," the Russian leader said.