The main event of September 13 in Russia is the interview, which Alexander Petrov and Ruslan Boshirov gave to RT editor-in-chief Margarita Simonyan. The British authorities accused these two men of involvement in the poisoning of Sergei and Yulia Skripal in Salisbury and referred to them as officers of the Russian military intelligence, GRU. 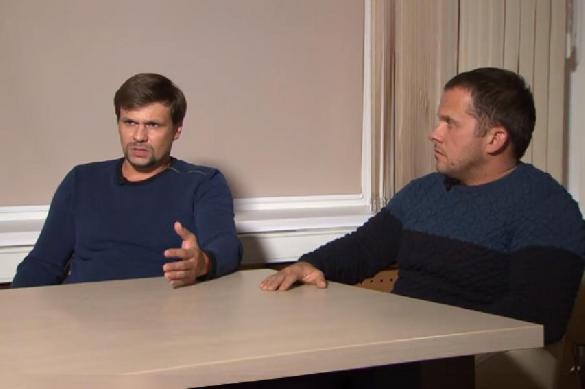 First off, the two men acknowledged in the interview that those were their real names.

"From the very beginning, we wanted to come to London and have fun there, it was not a business trip. Our friends have long recommended we should go to visit this wonderful town of Salisbury. We went there to see Stonehenge, Old Sarum, but we couldn't do it, because traffic in England was paralysed on March 2 and 3," Petrov said. In Salisbury, they also wanted to see the town's cathedral, which is famous for its spire.

Petrov and Boshirov acknowledged that they could have passed by Sergei Skripal's home, although they did not know where it was located.

The two men also said that they did not bring any poisonous substances or Nina Ricci perfumes with them.

"Isn't it silly for two normal lads to bring women's perfume along? When you go through customs control, they check all your belongings. If we had had something, they would have had questions as to why a man would have women's perfume in his luggage," Boshirov said.

Boshirov and Petrov responded negatively to the question of their work for the Russian military intelligence, which is commonly referred to GRU, although its official name was changed several years ago. The men said that they work in the industry of fitness and sports nutrition. They confirmed that they had been to Switzerland several times as well, but mostly for tourism.

The men said that their lived changed completely after their photos and videos were published in world media. "We can't go out, we are scared, we are scared for our lives, for our loved ones, for those people who know us," said Ruslan Boshirov.

It is worthy of note that Petrov and Boshirov gave an interview to RT the day after President Putin appealed to them to come out to media representatives.

Also read: Putin: We know who Skripal poisoners are