It appears that Ukraine is working hard to build a US Navy base in the city of Odessa. US warships call at the port of Odessa once in every three months. Most recently, while the Russians were celebrating Orthodox Christmas, US destroyer USS Carney DDG-64 arrived in Odessa at nighttime. 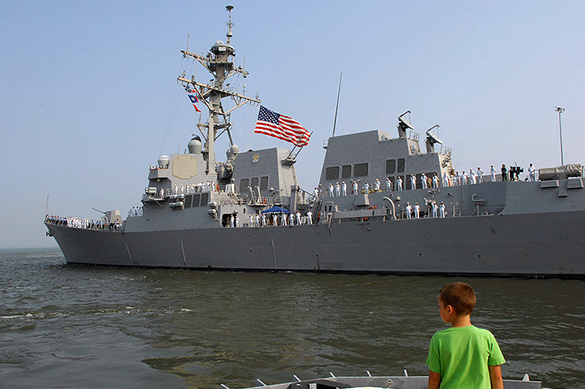 According to representatives of the Sixth Fleet of the US Navy, the purpose of the mission is to conduct operations to ensure security at sea and strengthen combined readiness and naval capabilities among NATO allies and partners.

The last time, when a US warship called at Odessa was in mid-November 2017 - USS James E. Williams stayed in Odessa for more than two weeks until December 2. The American destroyer was carrying 96 universal launchers with Tomahawk cruise missiles and 64 Standard-3 missiles.

Also read: NATO ships will sink in ten minutes should they attack Russia

The Carney destroyer is equipped with state-of-the-art radar equipment. Therefore, one may assume that one of the purposes of the mission to Odessa is intelligence and collection of classified information.

In the Nikolayev region of Ukraine, US naval specialists continue the construction of the Operational Control Center for the Ukrainian Navy. The construction began in July 2017. Thus, as we can see, the Pentagon, under the guise of military assistance to Ukraine, has been deploying modern infrastructure in Ukraine to conduct military operations and NATO reconnaissance activities in the Black Sea.

The port of Odessa is only 300 kilometres from the main base of the Black Sea Fleet of Russia in Sevastopol, so the activity of the US navy in the region is easy to understand. During the first days of 2017, the patrol anti-submarine aircraft of the US Navy P-8A Poseidon conducted a reconnaissance flight near the coast of the Crimea.

The Kiev regime seeks Ukraine's accession to NATO, and the establishment of the US Navy base in Odessa is part of this plan. In December 2014, the Verkhovna Rada adopted a bill to abandon the non-bloc status. According to President Petro Poroshenko, Ukraine's entry into NATO is "the main priority of Ukrainian foreign policy."

In an interview with Bloomberg, Poroshenko called NATO "the only effective security mechanism in the world." Needless to say that the Kremlin is not going to sit on its hands.