Putin: Russia will continue spending enough on defence not to be killed

On December 14, President Putin holds his annual Q&A session with Russian and foreign journalists. This conference is considered to be the beginning of his presidential campaign after Putin announced his decision to run for president again. Traditionally, Putin starts such sessions with a speech about Russia's economic achievements. This conference, however, is different, because questions started at once. 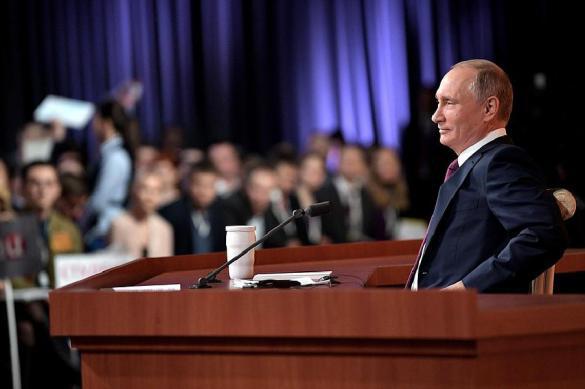 President Vladimir Putin will participate in the 2018 presidential election in Russia as a self-nominated candidate.

"Of course, I very much count on the support of the political forces that share my views on the development of the country, that trust me - in general, I count on broad support of citizens," President Putin said at a televised Q&A session with Russian and foreign journalists.

The president did not answer the question of who will be appointed the head of his campaign headquarters. "No final decision has been made yet," Putin said, adding that this is a "technical decision, of course." Putin said.

When asked why Putin is going to run again and what would be his mission, the president replied that Russia should be aimed at the future, and its political system should be flexible. Putin did not want to talk about the political program, noting that he practically has it already.

"The main thing is to focus the attention of the authorities and the society on the development of infrastructure, healthcare, education, high technologies, productivity increase - but all this should be aimed at increasing people's incomes," Putin said.

Answering the question of why Russia still does not have politician No. 2, and whether Putin is bored to run for this election, the president said that the political environment should be competitive. He wants to have a balanced political system which is impossible without competition. Yet, he added, Russian opposition activists are not competition to the current authorities because of Russia's specific peculiarities. "I cannot raise a competitor myself," the president joked.

Speaking about those peculiarities, Putin switched to comparing Russia's economic indicators today to those from the late 1990s. According to him, real wages and pensions have grown in Russia since the 2000s.

"Real wages have fallen in Russia as a result of the crisis phenomena of recent years, but since the beginning of the 2000s, real wages have grown 3.5 times, and real pensions - 3.6 times," the head of state said.

"When we talk about opposition, it is important not only to talk about the regime, but to offer improvements," Putin said. "If we compare what opposition leaders offer, doubts arise. One does not need to propose a shrilling agenda, but a real one, in which people would believe," Putin said.

Answering a question about Russia's defence spending and its possible influence on social benefits, President Putin said that Russia would be ensuring its security without taking part in an arms race.

"Our defence spending is balanced, because we need to ensure our country's security, but it should not lead to the destruction of the economy. Next year, defence expenditures of the budget will make up about 2.8% of GDP. This is a bit more than 46 billions of dollars. In the United States, they signed a law about the defence spending of 700 billion dollars, but of course, 46 billion is a lot for Russia," Putin said and continued with a joke:

"A father officer asks his son: "Have you seen my dagger?" "I've swapped it for a watch," the son replied. The father looked at the watch and said: "It's beautiful ... But what if gangsters come here tomorrow, they will kill me, your mother, rape your sister - what are you going to do? Are you going to come to them and say: "Good evening, it's 12:30 in Moscow?"

Therefore, Putin proceeded, Russia needs to strengthen its defense capability and the country will spend enough on military needs.