Putin will make Russia great again, because the West cannot tame him

On October 8, 2017, Vladimir Putin celebrated his 65th anniversary. Putin's rating in Russia remains on a very high level, and there are many of those who admire the Russian president in other countries of the world, even though Western media continue taking every effort to demonise him. They despise the Russian president, but they will not be able to muzzle him. 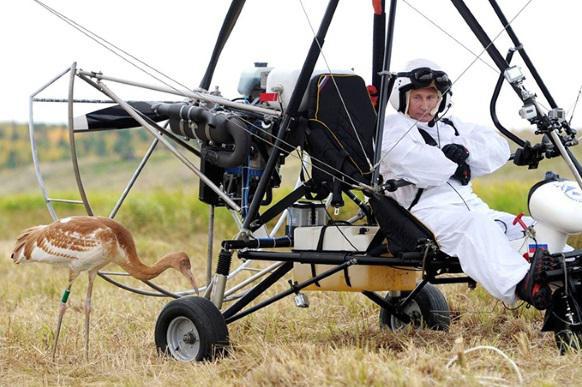 The Russian president, in the opinion of Western media, interferes in democratic elections, referendums, formation of coalitions and even threatens allied associations. For example, Spanish publication El Pais believes that Putin attacks the European Union by supporting the "illegal referendum in Catalonia" through the media.

Putin is to blame for everything

The absurdity of such statements can be explained simply: Russia is winning the information war. The information that the Russian media transmit to the West finds its reader and gets people's attention. They want to know more about life in the globalised world. For example, RT has an international audience of 70 million unique visitors a week with 19% falling for the USA, according to Ipsos.

According to the Atlantic Council, the population in three of the four countries of the Visegrad Four is more sympathetic to Vladimir Putin than to Angela Merkel. "In Slovakia, the results are particularly striking: 41% of the population sympathise with Putin, and only 21% said the same about Merkel," the article points out.

Of course, one needs to do something about this trend. Blaming Putin for everything sounds like a good propaganda tool for the purpose. For example, Brussels politicians tell the governments of the Visegrad group that they must adopt the euro and migratory quotas to stave Putin off.

Spanish online publication El Confidencial wonders: "Does Putin have the power to annex Belarus?" The newspaper assumes that after major Zapad 2017 military exercises, Russia left its troops in Belarus, which gives Moscow an opportunity to create new groups of troops in a short period of time to suppress riots in Belarus.

The anti-Putin campaign in the Western media develops further to demonise Russia against the background of its obvious success in the Middle East. An article penned by Samuel Rahlin for the Danish newspaper Berlingske titled "Putin as the leader of world conservatism" makes a surprise conclusion: "While hurricanes are raging in the world, Russian voters can take a breath of relief after Putin takes office till 2024 for another presidential term of stability. Putin has every chance to make Russia great again."

How to tame Putin?

How to tame Putin? Maura Reynolds suggested her recipe on pages of Politico. A group of her experts  concluded that one does not have to do much, because Putin will not be able to rely on either democratic legitimacy or the flourishing and modernised economy." According to the article, one has to keep Putin away from Ukraine, because Ukraine's road to Europe means the end of Putin's era. For this purpose, the article says, one needs to grant Ukraine some sort of "interim" membership in the EU and continue pressing Russia and sanctions. "After the election, the West should look for signs that Putin wants a different kind of relationship, one that is more collaborative, and should be prepared to respond to his signals. A key sign to look for is whether he picks a moderniser for prime minister," Reynolds wrote.

Westerners do not seem to be able to understand the reasons behind Putin's success on the international arena. He respects his partners' sovereignty from the positions of the "city sheriff", as the Americans would say. In other words, without any pressure and coercion, Putin achieves the desired result in the framework of certain rules of the game. It is very important to note that the Russian president is a very cautious man, a champion of moderate and defensive positions who considers Russia's security to be the most important objective of his work.

That is why Putin enjoys so much support and respect in Russia, but this does not seem obvious to many Western journalists. Shaun Walker of The Guardian went to the Irkutsk region of Russia in Siberia to find out why the Russians still respect their president so much.

"Life for many Russians has become harder since 2014, and yet Vladimir Putin, who has effectively been in charge of the country for 17 years, has approval ratings that have not dipped below 80%. People say their lives are hard and authorities do little to help them, and yet their support for the president remains high," the author wrote.

This is why the powerful propaganda machine of the West will never be able to tame Putin.