Resolutions, petitions, requirements and political statements take a lot of time, energy and paper. As a rule, they stir up too much noise and a fat lot of good. If the strong one want to flex their muscles, they do not need to make any statements or resolutions. They can disregard international law and do what they want - let's remember Yugoslavia, Iraq, Libya, etc. 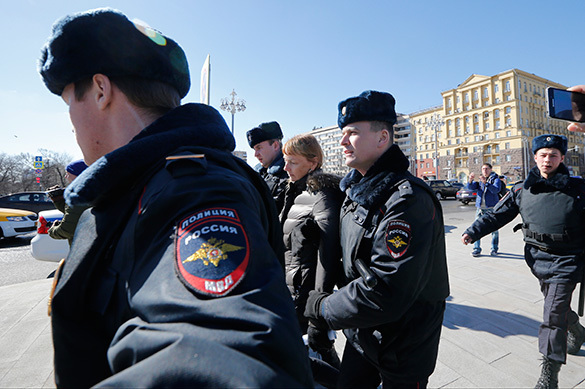 Today, we can hear European and American officials jumping out of their skin urging the Russian authorities to immediately release all those who were arrested during unauthorized rallies in Russia on Sunday, March 26 (protest actions took place in a number of Russian cities). As usual, the US State Department remains very emotional when it comes to Russian lifestyle.

Organizer of the rallies, Alexei Navalny, a citizen of the Russian Federation, was arrested for  organizing mass gatherings of people in public places that caused violations of public order. Navalny got off with a fine of 20,000 rubles and an arrest for 15 days.

Navalny himself said on his website: "All of our 98 rallies were coordinated, we must go out to take part in them in any case. If someone says: what if they detain me? I have this to say: if they detain you, you will make money out of this. You know that I have taken all of my arrests to the ECHR (European Court for Human Rights), and the government will pay me big amounts of money for everything."

As we can see, everyone has their own way of making money.

The US State Department promptly composed a sharp condemning statement about the actions of Russian law enforcement agencies during unauthorized actions against corruption that took place in dozens of Russian cities on March 26. For US officials, it does not matter that Russian law enforcers were working as correctly as possible.

The super-tolerant EU did not remain silent about the recent rallies in Russia either. On Monday, the EU foreign policy service released a statement with an appeal to release the protesters. The press release says that the detentions and the ban on demonstrations violate the rights of citizens to express their opinions and hold peaceful rallies.

Could the EU say anything else? In Brussels, they know for sure that if people take to the streets for unauthorized actions in a foreign country, the authorities of that country should support them in every way.

History knows several of such naive politicians, who believed in the purity of popular protests. If authorities can not stop a rebellion, it grows into a revolution, and even modest demands to reduce housing and public utilities tariffs (in Armenia, 2015) may develop into calls for a change of power. If authorities continue to play nice with protesters, the end for the people in power will come soon.

We could witness an example of outrageous historical naivety (and cowardice) in Kiev in 2014. It's amazing how such a cunning politician as Viktor Yanukovich could, in the name of his own political suicide, follow instructions from then Vice President of the United States Joe Biden not to introduce a state of emergency in Ukraine and not to take harsh measures against protesters on Maidan.

Biden urged Yanukovych to immediately withdraw riot police from the streets of Kiev. History will eventually show how the unfortunate president of Ukraine managed to put unarmed Berkut fighters against armed scumbags on Maidan and fritter everything away, including the whole country.

The sitting Kiev authorities are highly democratic according to American concepts. Ukrainians regularly express dissatisfaction near the Russian embassy in Kiev and remain unpunished for nearly everything that they do there. Even if they commit criminal acts during such protests, the Ukrainian authorities will release them "under personal responsibility."

To be fair, it should be noted that the European Union and the United States condemned the attack on the Russian embassy in Kiev. At the same time, the UN Security Council blocked a resolution condemning the attack on the diplomatic mission.

What about the land of the free and home of the brave? Waters can be muddy there pretty often too. The killing of African American Michael Brown on August 9, 2014 triggered major riots not only in the city of Ferguson, where it happened, but in many cities across the USA. The state of affairs in the US still remains unstable several months after the election of Donald Trump.

When US riot police clash with demonstrators, they have a short way with both protesters and everyone else, including journalists. Eleven media employees from different countries of the world were arrested and taken to police stations in Ferguson during the first four days of the riots. Two German reporters were not lucky at all: they had to spend all that time in jail, handcuffed.

Europe, Canada. Japan, Australia and all countries sympathizing with G7, did not say anything.

The Egyptian Foreign Ministry issued a sharp statement condemning the use of force against demonstrators. Iran's Vice Foreign Minister called the suppression of protests in the USA "an outrageous case of racism." Chinese Xinhua news agency said that "the US needs to focus on solving its internal problems instead of interfering in internal affairs of other countries."

In response, the US State Department stated clearly: Ferguson was an internal problem of the United States of America that should not concern other countries.

"We here in the United States will put our record for confronting our problems transparently and honestly and openly up against any other countries in the world," then deputy State Department spokeswoman Marie Harf said.

In a nutshell, mind your own business, she said.

On November 28, the Los Angeles police had to work hard to suppress the riots that broke out after Ferguson. As many as 338 people were arrested.

Some of them were released on bail. They were charged with petty hooliganism and illegal meetings, so the payment was set at $500. However, many could not find even that money. All of a sudden, a "miracle happened": "We have every legal right to keep them until they post bail," Cmdr. Andrew Smith told the Los Angeles Times, "but in light of the holiday ... [LAPD Chief Charlie Beck] called and said he wants everybody who is eligible for release to be released by [Thanksgiving] dinner time."

In November 2016, nearly 30 people were arrested during riots in the US city of Portland, shortly after the election of Donald Trump as new US President. To disperse the crowd of protesters, the police used pepper gas and rubber bullets.

On January 21, 2017, the police detained at least 217 people in Washington. The detainees were kept in custody all night before they were brought to trial the next day.

In Europe, the police can use batons, handcuffs and police wagons too. In April 2016, 400 left-wing activists were detained in Germany's Stuttgart. The German police used tear gas and water cannons against demonstrators. One can find similar examples in other countries of Europe.

Examples, examples, examples ... Authorities of any country should react to protests, draw conclusions and solve problems. Most importantly, the state must protect itself. One needs to respect democracy, but one can not play democracy.