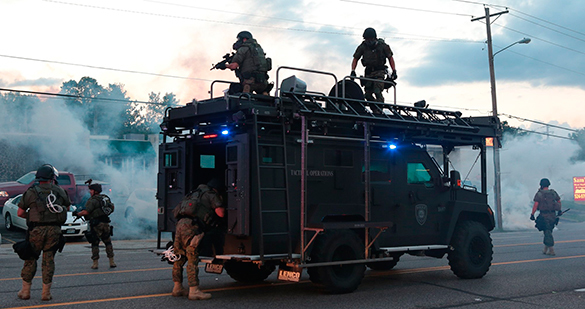 Ferguson police, known for their brutal methods of work and indiscriminate use of weapons against protesters even during peaceful demonstrations, opened fire at  a group of journalists, who were covering one of such acts.

Reporters Ryan Devereaux, Lukas Hermsmeier, Ansgar Graw (a representatives of German major publication Die Welt) and Frank Herrmann were shot with rubber bullets and then arrested as they were covering Ferguson protests on August 18.

The journalists filed a lawsuit claiming the officers "intentionally and willfully subjected plaintiffs to violations of freedom of the press and free speech, by purposefully obstructing plaintiffs from carrying out their assignments as members of the press - assignments which include oversight of police action against citizens engaged in protest activity."

According to Devereaux and Hermsmeier, they were standing on a specially designation location for media representatives and had adequate signs and IDs with them. When they attempted to interview some of the protesters, they hear a police officer saying through a loudspeaker "This is your final warning." Immediately afterwards, the officers opened fire at them and used tear gas.

According to the journalists, the police did not stop shooting even after the journalists, with their hands up, went towards the officers and tried to explain their professional intentions. The cops handcuffed the journalists tightly, causing pain to the media representatives.

The officers were reprimanded for their failure to work with the media during such events. The journalists have not received any apology or compensation for physical damage. The police officers, who attacked and arrested the journalists, still work at Ferguson police.