No time for rally: Why Russians dislike protests

Two-thirds of Russian citizens (67 percent) believe that demonstrations and protest actions are ineffective in influencing policies of the authorities. Last year, the number of those sharing such a point of view was lower - 60 percent. What changed in five years after mass protests in Russia in the winter of 2012? 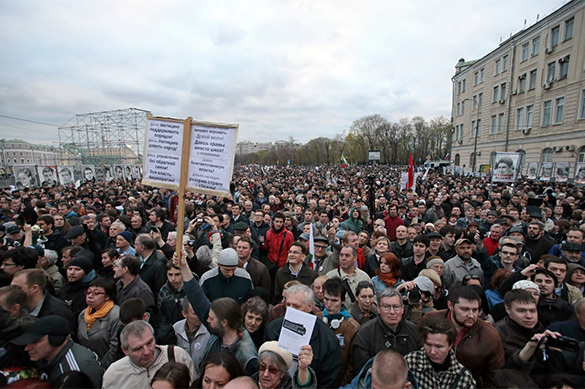 Every fifth member of the survey said that a rally was an effective way to show influence on authorities. This is 11 percent less than in 2016, the poll conducted by Levada-Center said.

Sociologists asked the participants of the survey to express their attitude about mass protest actions that took place in Russia in late 2011 and early 2012. More than half of respondents - 54 percent - said they did not support those actions, whereas 26 percent expressed an opposite point of view. Twenty percent of respondents were left undecided. According to 35 percent of respondents, the protests that took place five years ago did not show a serious influence on life in Russia, while opposition leaders showed their inability to put forward ideas or action programs that could captivate many people to trigger a reform of the society at the "bottom" (18%).

Eight percent of respondents said that the protest actions in Russia from 2012 showed the solidarity of different social layers of the society, whereas the authorities were frightened, even though they did not keep their promises, but only imitated reforms. Twenty-four percent were undecided. The survey was conducted on January 20-23 among 1,600 people in 137 settlements of 48 Russian regions.

It is worth mentioning that the protests actions of 2011-2012 took place mostly in Moscow and (at a lesser extent) in St. Petersburg and a few other cities. Experts do not see anything strange about the fact that people lose interest in rallies.

"The time when this tool was used quite often and in some cases it was considered that it was an  effective tool, has long gone. Today, people realize that such measures do not produce much effect. More importantly, they believe that this is an extreme measure, when the degree of emotional dissatisfaction is too high," the head of the Ural branch of the Civil Society Development Foundation, Anatoly Gagarin told Pravda.Ru.

According to the scientist, people believe that there are other more efficient methods, such as different formats of dialogue with those who make decisions. "People are practical, they understand that it is necessary to use the tools that really affect those who can make a decision," the expert told Pravda.Ru.

Anatoly Gagarin thinks that different formats of public dialogue can serve as most effective ways to reach the authorities and show required influence on them. A dialogue can be conducted with the participation of public chambers or expert clubs.

"People may rally for any reason, but then it turns out that the leaders of such actions are unprincipled individuals," Deputy Director General of the International Centre for Regional Development Oleg Stolyarov told Pravda.Ru.

According to him, the Russian opposition movement has discredited itself by fighting for power inside the movement. "A rally is an open concentration of people's efforts on an idea. If there's no idea, what do the masses do? This is not a rally, but a pointless and brutal rebellion then," the scientist of politics told Pravda.Ru