Russian street protests back to where they came from

Exactly a year ago, after the elections to the State Duma, Russian cities saw mass protest rallies. They were the largest in Moscow, although at first rallies in other cities were significantly more numerous than usual. However, two or three months later the rallies became limited to Moscow and, to some extent, St. Petersburg. Even in these two cities there was a noticeably sharp decline in the number of rally participants. 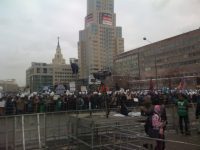 What was the result of the protests that began in December of last year? How did they impact political life of the country and the authorities? What is the state of the protest movement now? "Pravda.Ru" spoke with political scientist and publicist Leonid Radzikhovsky to find answers to these and other questions.

"It has been a year since the beginning of mass protests. In your opinion, what has changed in the life of the country over this period? Can you say that these protests affected something? Or did they only make an impression in the beginning because it has been a while since so many people took to the streets of Russian cities?"

"A lot has changed this year. We see what is happening now. The first thing is fight against corruption. Many say that this is a campaign. Of course, this is a campaign, but this campaign is the deepest and most radical in the last 20 years. I do not remember a single case in the history of Russia in the 19th or 20th centuries where ministers would be accused of corruption directly, ministers, not just officials. I do not remember any criminal cases where ministers would be on the verge of being accused. So far it has not happened, and maybe will not happen, but at least the anti-corruption wave has never reached that high.

"Second: Putin announced that it was necessary to carry out direct elections to the Federation Council. The fact that they were canceled at some point was a mistake; it was obvious to me at least. Also, it is obvious that canceling direct elections of governors was a mistake. But it's not about never being wrong, it's about being able to correct your mistakes. The authorities are correcting those mistakes. They could have done it earlier, though they are doing it now. Thus, the changes are significant.

"Another question is how these changes are perceived by the society. So far the public is not impressed. I talked to many people, and they are very skeptical about this fight against corruption and so far do not consider direct elections to be important. But this will happen over time. If the anti-corruption campaign continues, the attitude of the society will change.

"But the fact is that they would have a different level of legitimacy. People would have no one to blame because they elected these officials on their own. This would significantly reduce political tension in the country. This is the only purpose of democracy, this is its meaning. By no means it is about selecting the best, just reducing political tension in the society. As for the rallies, they have drowned. The movement has shrunk and returned to the place of its origin, that is, the Internet. But the "Decembrists" awakened Herzen, awakened the authorities.

"They did nothing by themselves. Now they look like pitiful narcissistic clowns. But they awakened the authorities. It is clear that if it hadn't been for these pitiful, silly protests, there would have been no changes that we are seeing in politics now. Or, in any case, these changes would be slower and more timid. So the December movement has played its role.

"However, the movement itself is a classic false start. That is, they started off and two steps after the start they fell down."

"Recently, there has been a lot of talk about the fact that the protest was on the decline. The opposition camp is also talking about it. Do you agree with this and what, in your opinion, are the reasons?"

"The protests are not just on the decline, there are no protests today. Both quantitatively - if the first and second time 50 to 70 thousand people came out into the streets, now it's 10 to 15 thousand - and, most importantly, qualitatively. Before, there was a drive. In a certain environment it was trendy. And people - especially now, in the 21st century - react primarily to fashionable brands. At that time the brand was very popular. In essence, no one was thinking too much about the slogans or the leaders. It was inspiring.

"Now it's boring, it is no longer fresh. Now the people who inspired hope only cause laughter. Moreover, they make each other laugh. The last stupid thing that they did was the election of a comic Coordinating Council of the opposition.

"The movement will be necessary, a new movement, with new leaders, new people. Naturally, the movement will be there because the society is dissatisfied with the status quo. It is not just the advanced creative class who is unhappy, but a much wider population. They are not able to articulate their discontent - it's true. And no one knows how to do it, it is also true. There are two ways - either the power will guess what these feelings are and try to expand the political space and evolve towards greater democracy. Or power will not be able to do it. And then the collapse of the power system will begin. Only it will not happen now, but closer to the new electoral cycle."

"Who could be called the leaders of the protest? How did they manifest themselves in the past year, how were they memorable? In general, it is appropriate to say that there are leaders at all?"

"There are no leaders there, it's completely random people. None of them are trusted not only by the people, without question, but even in their own opposition environment.

"It is not guaranteed that in the 21st century there can be leaders of the same type we used to have in the 20th century and earlier, charismatic idols adored by the crowd. There are none of those not only in politics but even in art, in rock music. If you compare what happened at concerts of Pugacheva, Tsoi, and what is happening now at pop and rock concerts, these are simply incompatible things. The contemporary times are not good for leadership, and we are no exception.

"But if we move from these high matters to a more narrow policy, the people who claimed to be the leaders in December of last year have absolutely shrunk. Alexei Navalny has done nothing this year, and recently his behavior has been quite strange, he is just silent. He can remain silent within his comic Council. But beyond this council he has to say something. Apparently, he has nothing to say. He is afraid to fight with the liberals and lose their support, especially in the West. He is afraid to fight with the nationalists and lose mass, as it seems to him, support in the country. He is afraid of everything. A leader who is afraid of everything is the leader of cowards. Cowards do not need a leader.

"As for Sobchak, the transition from glamor and pop to a leadership role in a political movement is the task of incredible complexity. So far she is not an inch closer to its completion. She is still perceived as a glamorous pop diva, and the public treat such people in a certain way. Nobody likes them, many pretend to despise them, but are actually jealous. She has no chance to become a leader of the mass movement, the movement of poor, unhappy people, people for whom information of two million dollars found in Sobchak's apartment sounds like a personal slap on the face.

"There are no other leaders there. Former chess champion Kasparov and former Minister Nemtsov cannot be considered leaders.

"The most interesting thing is that despite the apparent helplessness of these leaders, within the last year the large, wide environment of the so-called creative class did not produce any new, fresh leaders. It is really surprising to what extent people in our country are incapable of self-organization."

"What are the future prospects of the protest movement? Can we speak about the movement because it seems that rallies and marches again became the task of the opposition activists, as it used to be?"

"The movement, particularly "Decembrists" movement, is over. They have earned no political capital, and could not return the capital that they got as a freebie in December of 2011 as a trust loan. In this sense, they are bankrupt.

"But of course the protest, the protest movement, will exist. It is pointless to guess who will be the leader of this movement. Politics is not a business. Multiple bankrupts may raise again and again. It is more likely that the new movement will have new leaders, in terms of a movement from the bottom.

"But if the government has brains, it will go about it in a different way and, through the expansion of the political space, it will create a calm political situation for the competition from the top. This is a major problem throughout Russian history - pathological irrational fear of political competition. It would seem that the experience of Western countries could show Russian officials that only such a system is reliable and stable where there is political competition. The elite is divided into two or three camps. They compete with each other quietly, following the rules. This elite is unwavering and such system will never collapse. It is not afraid of crises and shocks, it fears nothing. But pathological irrational fear of domestic competition inhibits the Russian elite. Every time it makes them think with horror of the protest movement, unrest, etc.

"Although, in essence, what protest movement are we talking about? In Russia, 50 thousand people took to the streets. In London, it was 500,000, in New York there was a million. And everything is fine. They are not afraid. They never present any threat to the authorities. A revolution is out of the question. If a flexible political system is created, the problem of the so called protests will be resolved once and for all the same way it is solved in the West."