Russians do not need another revolution 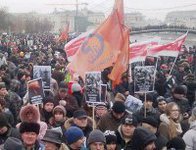 Experts continue to comment the meeting, which took place in Moscow on Saturday, December 10. Some say that the meeting against the results of the parliamentary elections was a political flashmob. Other say that it was a normal element of democracy, which demonstrated that Russia was no different than any other Western democracy. Many observers said that the organizers of the meeting on Bolotnaya Square - Nemtsov, Shenderovich and the company - remained on the political fringe they were on before. They failed to privatize people's discontent.

"The vast majority of the people who took part in the meeting did not follow the calls from Shenderovich, Nemtsov and other figures, whose reputations raises doubts with many," Russia's Ambassador to NATO, Dmitry Rogozin, said in an interview with Pravda.Ru.

"It appears that people have serious claims to many aspects of their life. This apparently makes them express their points of view. The authorities are supposed to listen to our people and punish those who insult the people's faith in the law. At the same time, I think that this is a complicated situation that we are having. If people rock the boat here, our staunch friends in the West do not hesitate to use their powerful potential to weaken Russia, just like they did with orange revolutions in the CIS and humanitarian bombings in other countries. That is why, all Russian patriots are supposed to be as careful as possible. They must respect each other, respect various points of view, so that their energy changes the situation for the better, rather than sends people to the barricades," Rogozin said.

Vladimir Mamontov, a member of the Public Chamber of the Russian Federation, said that Saturday's meeting on Bolotnaya Square gathered both those who were fed up with unsolved problems and the political profiteers, who wanted to destabilize Russia, although they were in the minority.

"All the people who came to the meeting and left quietly, especially those who did not scream "Go take the Kremlin!" or "Revolution" - all of them did good. Those who screamed those things are idiots. Everything went well in general. The people came, they said what they wanted to say and it all ended without any incidents. Our generation has seen tanks in Moscow and Russia in ruins. We must not overthrow our own country in these political disputes. We've already seen this before, and we know how it ends. One could hear the voice of common sense during the meeting, some offered to nominate new leaders and establish new parties instead of going around in circles," Mamontov said.

Igor Borisov, the chairman of the Council of the Russian Public Institute for Election Rights, told Pravda.Ru that the meeting on Bolotnaya Square was an element of democracy. A former member of the Central Election Commission believes that the Russians have proved to be capable of expressing their concerns in a civilized way.

"Yesterday's meeting is an element of the Russian democracy, which permits the public expression of thoughts. This is just another fact to prove that Russia is just as civilized as the countries of Western Europe that try to dictate something to us," Mr. Borisov said.

Scientist of politics Pavel Danilin is certain that the meeting on Saturday was not a political event. According to him, the event was more of a flashmob organized by well-known personas  - from Nemtsov to Chirikova. The resolution of the meeting looks absolutely inadequate, the expert said. Meetings do not cancel election results. "Only courts can cancel the results of the vote - no meeting can do it. The courts have not received any serious applications which could be considered as serious grounds for canceling the results of the election. The things that we have today only confirm the legitimacy of the elections," the expert said.

Scientist of politics and the chairman of the Council for National Strategy, Iosif Diskin, stated that the participants of the meeting were concerned about the results of the parliamentary vote in Russia. However, he added, the organizers of the meeting wanted a revolution instead of the rule of law.

"The people at the meeting did not express their support of certain parties. There were many people who represented various political movements, even exotic ones. It seemed to me that the people didn't want to be treated like dummies," the expert said.