In late December, Russia's long-range aviation celebrated a professional holiday. Some may believe that strategic aircraft do not mean much in comparison with ballistic missiles or nuclear-powered submarines. Yet, Russian strategic bombers play an important role. They constantly remind Russia's "sworn friends" of something that they often forget: in case of aggression against Russia, she will retaliate. 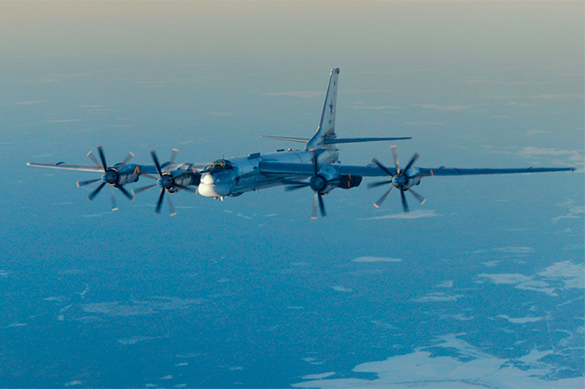 The units of strategic aviation appeared in Russia in 1999. However, the first squadron of heavy bombers was created in 1914. The bombers were subsequently used both in the Great Patriotic War and then in the Cold War, especially at a time when the Soviet army already had nuclear weapons, but had no technology, other than airplanes, to deliver nuclear weapons to targets. The USSR developed full-fledged strategic missiles a while later.

Interestingly, neither Russia nor the United States have abandoned long-range strategic aviation. Russia's strategic Tupolev bombers were made several decades ago, but they still remain in good condition. It is only Russia and the USA that have an air unit in their nuclear forces. This unit makes the latter a nuclear triad.

Indeed, any weapon is valuable not only for its damaging effect during a war, but also for its ability to prevent a war. Ancient Chinese strategists said: "The best battle is a battle that has not started."

Washington politicians and their European allies, especially those who believe in the "omnipotence" of the "NATO umbrella," dream about a victory over Russia.

Locations of nuclear weapons are strictly classified, because they can be destroyed even with the use of conventional weapons in case of a military conflict.

As soon as Russian strategic Tu-160 White Swan bombers fly over the Atlantic, the press of the "good old England", together with mass media outlets of many other NATO countries start trumpeting about the notorious "Russian threat." At the same time, the Russian strategic aviation does not play only a demonstrative role. The Tu-160 bomber is a very formidable weapon. These long-range aircraft can overcome distances of over 14,000 kilometers. A Tu-160, if refueled, can fly to Venezuela. The power reserve of NATO fighter aircraft is four times less.

The Russian aircraft is equipped with state-of-the-art automated defense systems and missile-gun armament. To crown it all, Russia's electronic warfare systems are most advanced in the world to date.

The flight range of X-101 cruise missile (X-102, a nuclear-capable version) that Russian long-range bombers carry makes up 5,5 thousand kilometers. One Tu-160 White Swan bomb carries 12 of such missiles. The older Tu-95 carries eight missiles. Each of those missiles can carry a 250-kiloton warhead. For comparison, Hiroshima was completely destroyed by a bomb of "only" 20 kilotons.

Now let's calculate: 16 "White Swans" carrying 12 X-102, plus a total of about 50 Tu-95 with eight X-102, and we have the total of nearly 600 carriers. For comparison, Russia's Strategic Missile Forces currently have about 400 missiles with 950 warheads. As we can see, the aviation component of the Russian "nuclear triad is far from being just an "outdated symbol" of military power.