Inna Novikova: Gloating over death is always an act of savagery

The crash of the Tu-154 over the Black Sea has not left anyone indifferent. Against the background of condolences to those, who lost their loved ones in the terrible disaster, one can hear happy voices from Ukraine and Russian liberals. Pravda.Ru editor-in-chief Inna Novikova commented on the situation. 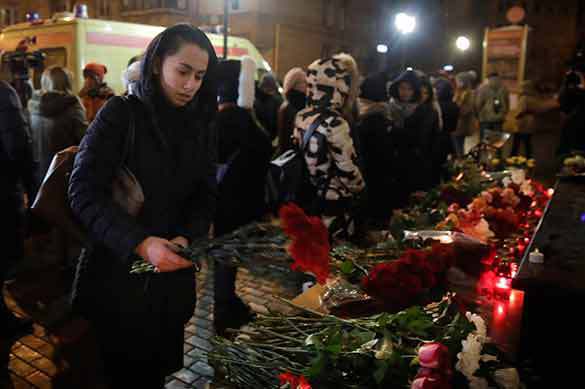 Russian television channels were showing photos of those killed in the Tu-154 crash near Sochi the whole day. Beautiful faces. How ridiculous and insulting. In Russia. Peaceful sky. Good weather. A reliable plane. Experienced pilots. The navigator had been awarded for the successful landing of the Tu-154 that lost control in 2011. It is hard to believe that it has actually happened. One can stay alive in most horrible and complicated circumstances and die all of a sudden in simple situations.

Yet, one gets very annoyed with those happy yelps about the death of 92 people, who were killed in the plane crash. Some people grieve, while others indulge in celebrations and backbiting.

Attitude to death is a litmus paper, a weather vane, that clearly distinguishes between the good and the bad. It's all relative, but there are certain things in the world that always remain constant. Even love and hate may swap poles easily. Yet, attitude to death is unvaried always.

Respect to death is the absolute value, clear at all times and to all peoples, to all cultures and civilizations.

Gloating over death is always an act of savagery. Crowing about the death of those whom you consider an enemy is nothing but barbarism. If some people are proud to own a passport with a double-headed eagle on the cover, and some other people consider them their enemy, this is an act of paranoia or delusions of grandeur.

At the same time, everything has a happy medium. It often happens, when all are guilty and all are right in their own sphere and to their own extent. One should nearly always negotiate, look for consensus and prioritise.

Yet, attitude to death is an absolutely unequivocal measure. Either evil or good - no other option is given. If people gloat over someone else's death or memory (even if it goes about the death of a serial killer like Chikatilo) - do not trust those people ever, no matter what.

Even the Poles and the Lithuanians remain silent, even though they despise Russia just like our domestic "liberals" or Ukro-Bandera-mad "patriots". They have not presented condolences, but they have not started dancing on bones either, even though they were afraid of people in military uniforms from the Alexandrov Ensemble. They said nothing.

We are very sorry for all the victims of the tragedy - the Alexandrov Ensemble, Dr. Liza, journalists, people from the Ministry of Defence, the crew ... We cherish their memory.