Armata tanks to be armed with 'Pterodactyls'

Armata tanks will be equipped with reconnaissance drones to ensure all-around scanning of the terrain for the crew. The drone, designed by the Moscow Aviation Institute (MAI), will be able to stay in the air for a very long period of time as it will have no on-board power sources. The UAV will  receive power via a flexible cable directly from the tank. 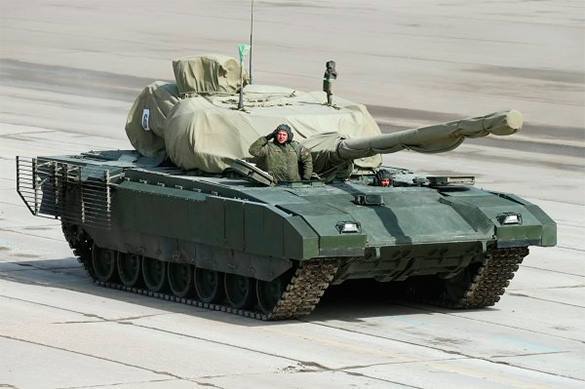 The drone was called "Pterodactyl." The new lightweight UAVs is made of composite materials to ensure its durability and lightness. The cable-powered drone will be able to fly around the tank in a radius of 50-100 meters. It will also be able to ascend in the air for tens of meters. The portable radar and thermal night vision device will serve as the eyes of the "Pterodactyl."

The most important part of the UAV - the cable system  - has already passed tests at the laboratory of the Institute and fully confirmed all specified characteristics. Cable power gives the UAV a very serious advantage as it will be able to stay in the air for an indefinite period of time. Additionally, the UAV will have no battery that can therefore be replaced with additional useful equipment.

The new UAV is designed as a tiltrotor - the aircraft, the propellers of which rotate together with wings, thus combining the functions of both an airplane and a helicopter in one machine. The peculiarity enables the drone to develop high speeds in the air to catch up with the tank moving at full speed. The drone will be able to take off from the hull of the tank.

As often happens, the above-described technical solution was invented a long time ago - in the late 1960s. The technology was designed for the German prototype of unmanned helicopter Dornier Do-32K. The helicopter used the cable system to receive both fuel and commands on it. The cable power system is currently used at Israel's Hovermast copter, although it does not work in tandem with a combat vehicle.

The creators of the "Pterodactyl" believe that the combination of the UAV with the tank will be used for advanced military hardware, in which the weapons range is smaller than that of on-board detection equipment. For example, Armata's gun can strike targets at a distance of up to eight kilometers, but the distance required to detect enemy's tank through the sight aperture is only five kilometers. The new technology will enable the tank to attack out-of-sight enemy objects.

Armata tanks outfitted with drones will be able to scan up to ten kilometers of surrounding terrain.  The peculiarity will give Armata an indisputable superiority over other existing models of armored vehicles that have no such drones.