The Sunday Telegraph newspaper has obtained a secret document from the British Defence Department. The document is entirely devoted to the power of Russia's T-14 Armata tank. According to the newspaper, this tank can not be stopped. The authors of the document also doubt that someone will be able to develop a tank that would outstrip T-14 Armata in the next 20 years. 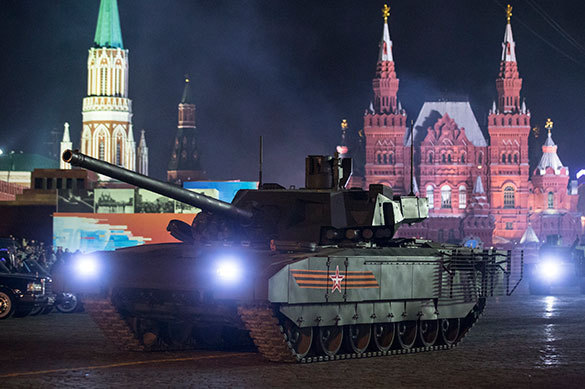 The document lists the advantages of the Russian tank. For example, the tank crew is not located in the turret. The Armata crew consists of only two people, who sit in a special protective capsule inside the body of the tank. The Armata is said to be much faster and lighter than any Western tank. The Armata, the newspaper concludes, is a "revolutionary tank."

The author of the article asks a natural question: how could the West lag behind Russia in the development of new weapons? He suggests that in the recent years, Western countries have been struggling against poorly armed rebels and were thus moving in a wrong direction. Western arms strategists were paying first priority attention to protection against disguised explosive devices, while ignoring such an important aspect as a classic tank battle. After the Cold War, Western countries have only been modernizing their outdated tanks without creating new ones.

"Are we on the cusp of a new technological arms race? Has an understandable focus on defeating the single threat of IEDs distracted Western military vehicle designers? Challenger 2 [the British tank], with life extension programmes, is currently due to remain in service until 2035. Is it time to rethink?" the article says.

Noteworthy, the T-14 tank will also use permanent reconnaissance drones. With the help of drones, the tank crew will be able to see everything that happens around thanks owing to HD-camera, radar and night vision devices.