Russia must protect its population now, before it is too late

The population of Russia may shrink considerably in the foreseeable future if the state does not take quick and drastic measures for its protection. The improvement of the demographic situation in Russia depends on the government policy, experts believe. 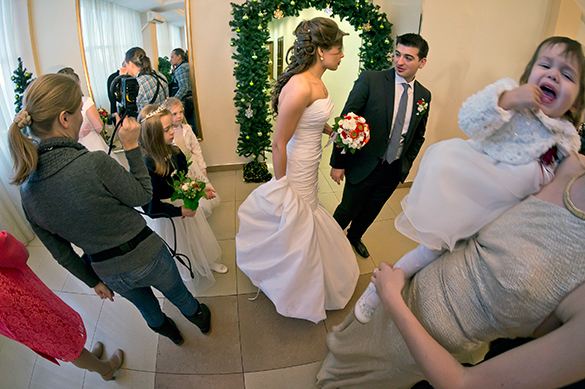 Generally speaking, the demographic problem is a problem not only for Russia, but for many other European countries, even Asian ones, such as Japan, for instance. Yet, this issue has its own peculiarities in Russia - they are mostly associated with the disaster of the 1990s.

"Since the 1990s, most Russian families have preferred to have only one child. Presently, two-thirds of Russian families have one child and only six percent have three or more children. One needs to increase this number to about 50 percent. If we still have the trend for one child in a family, the Russian population will shrink twice in 30 years," the head of the Department for Sociology of Family and Demography at the Moscow State University, Professor Anatoly Antonov said, the Rossiyskaya Gazeta wrote.

The professor also pointed out the trend towards an increase in the number of childless families and the growing stratification between the rich and the poor.

The human rights activist referred to Vladimir Putin's article about social issues that was published before the presidential election in 2012. In the article, Putin spoke about demographic problems as well.

"He wrote there in black and white that if we do not take urgent measures in this regard, then by the middle of the XXI century Russia will lose 50 million people. This is iron logic which is entirely and absolutely correct," said Boris Altshuler.

"After the demographic collapse of the 1990s, the number of schoolchildren in Russia has reduced twice. In the mid-2000s, there were schoolchildren who were born during the Soviet era. In the RSFSR, the population was growing by 2 million people a year. During the 1990s, we had one million babies born a year. Then came Putin's reforms to stimulate the birth rate in the country, the maternity capital was introduced, and the general economic situation stabilized. In fact, the birth rate exceeded the death rate at some point, but it did not reach the Soviet level of 1.5-1.7 million. Nowadays, the girls, who were born during the 1990s, enter their childbearing age. Therefore, we are entering the period, when the number of mothers will be twice as less than it was during the 1990s," the expert told Pravda.Ru.

Boris Altshuler also said that there are other problems, such as, for example, assistance to large families. "There are three key issues that ensure the survival and well-being of families with many children. First and foremost, it is the issue of housing. Secondly, parents need to be able to feed their children. Thirdly, it is healthcare. There are huge problems in all these three issues in Russia nationwide," the human right activist said pointing out the need for the state to pay more attention to such issues.

According to the Head of the Sector for Demography, Migration and Ethno-Religious Problems of the Russian Institute of Strategic Research under the President of the Russian Federation, Igor Beloborodov, the problem of the dangerously low birth rate has existed in Russia for a long time.

"During the 1960s, the birth rate dropped below the population reproduction level, but the fact had been ignored and not paid attention to for a very long time. Yet, there are always loose ends from any weave. In 1992, the open phase of depopulation started in the country. It happened without any wars, famine or repression. It happened due to the free choice and the free will of Russian people, who started refusing from having two or more children. Two children per family will not save the Russian population today. One needs three-child and larger families to improve our demography," said Igor Beloborodov in an interview with Pravda.Ru.

"With the current birth rate level, the population is reduced by half during 70-80 years. This is a very short historic period. We understand that the age structure is not perfect in the country either. Therefore, the Russian population may shrink twice even faster," the expert added.

According to Igor Beloborodov, one needs to meet several requirements to overcome the current trend.

"First and foremost, one needs to revise attitude towards human life. One needs to put an end to abortions. I am not saying we should prohibit them. We need to constitutionally document the value, sanctity and protection of human life from the moment of conception. Of course, mass media should be involved in the powerful propaganda of healthy family lifestyle. A full strong large family with three children minimum should be the gold standard," said the expert.

"Families with children should enjoy all sorts of privileges, preferences - everything, including awards and rewards. We need to change our education system to raise family-oriented individuals. Students should be taught at school how to become a good parent, how to maintain good relationships with their spouses and how to raise worthy members of our society. If we can do it in several years, the situation will start improving," said Igor Beloborodov.

It will take many years and even decades to improve the situation, but if Russia does not start acting now, it will be too late.