Russia's Slavic population to account for only 25 percent by 2020?

Russia is facing a threat of a takeover by Muslims that it will not be able to cope with. This apocalyptic prediction was made by the vice -president of the American Foreign Policy Council Ilan Berman. 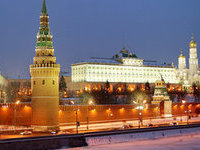 Vladimir Putin's article in The New York Times seriously offended the United States. This is true both for the establishment, and, judging by the reviews, ordinary Americans. Berman's article can be considered one of the responses. It was published by one of the most widely read American newspapers, The USA Today.

The American Council on Foreign Relations was founded in 1982 under President Ronald Reagan and is considered an expert body close to the Conservatives.

Berman was not the first one to talk about the Muslim and other threats to Russia. He wrote about this after the terrorist attack in Boston arranged by the brothers Tsarnaev. Then the vice president of the American Foreign Policy Council talked about the "Russian trace" in the sense that Russia was unable to cope with the threats in the North Caucasus, which backfired in the United States.

Now the words are much harsher. That, again, is understandable. The desire of the author of the article to show that Russia is a weak country is obvious. Berman, referring to the demographic data, noted that the Slavic population of Russia was decreasing under the devastating impact of reduced life expectancy, rampant drug and alcohol abuse and low birth rates.

He concluded that if the situation does not change, in as little as seven years, by 2020, the Slavic population of Russia will account for only 25 percent. Russia is pressured not only by Muslims, but also China expanding into depopulated areas of Siberia and the Far East.

The author of the book Implosion: The End of Russia and What It Means for America painted a bleak picture for Russia. He believes that the trend is setting the stage for a civil war with radical Muslims. As for China, if an open conflict does not happen, the competition will intensify and the Russian authorities will not be able to deal with these issues.

TV presenter Maxim Shevchenko called the story of the American political scientist a "complete nonsense." "Such a stupid look at the problems of another country is typical only for an American. They are known for their ignorance and primitive look. Clearly, there can be no threat from several million Muslims to one hundred million-strong Christian population. Many of them live in Russia without any attempts at expansion," he told Pravda.Ru.

"Of course, something needs to be done with the problem of migration," said Maxim Shevchenko. "But I think the issue of migration is solely a consequence of dominance of liberal capitalism in Russia. Today the interests of capital brought here by people from Asian regions neglecting their rights and the rights of Russian citizens and the interests of the Russian society are dominant. The capital is linked with criminal bureaucracy, criminal law enforcers, pure criminal, and brings a lot of money. This money, incidentally, is transferred to America."

In his opinion, "this problem undermines the labor market, largely destroys the economy, and generates corruption. But in no way it threatens Russia's seizure by some foreign cultural communities, or something like that. More so the liberal capitalism leads to the Americanization of Russia, to its degradation. It is so absurd that it is difficult to comment, to be honest," said the expert.

"We do have problems, like every great country located in the center of a vast continent whose economy is developing, and that is bordered by a large number of highly populated countries. But these problems, believe me, are hundred times smaller than the problems in any Western country. When we improve the situation in the labor market, I am sure that the situation with illegal migration will instantly get better. There are no cultural conflicts associated with Islam and Christianity in Russia, and there cannot be any, "said Maxim Shevchenko.