If Crimea voted not to reunite with Russia, where would it be?

In the summer of 2016, the Crimean Peninsula attracts not only tourists, but also NATO warships - there are not less than ten of them in the region already. However, NATO ships do not dare to approach the Crimean coast as there is a serious obstacle on the way - the Russian navy. 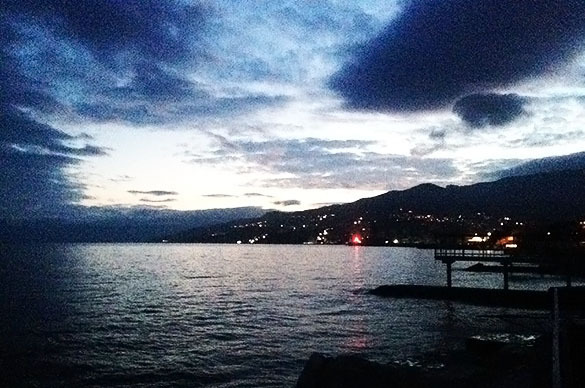 Not that long ago, the North Atlantic Alliance was planning to build a military base in the Crimea. The plans were not destined to materialize - they all went up in smoke after Russia reunited with the Crimea. The Pentagon and NATO were planning to deploy a US missile defense system on the peninsula along with Patriot missile systems. If the plans had become true, NATO and the USA would have been able to control Russia's southern airspace and block all launches of Russian ballistic missiles on a vast territory.

Those plans were no secret. Even today, the US authorities do not conceal the reasons behind their requirements to return the Crimea to Ukraine.

US Vice President Joe Biden, for example, told reporters that the USA was interested in developing cooperation with Ukraine. The Crimea, Biden said, was of key interest for the US. The region could serve as an excellent location for a US-NATO base. It is an open secret that Ukraine wants to be a NATO member, but the process was frozen on account of the ongoing conflict with Russia, he added. The USA will be able to resume the dialogue with Ukraine about the country's Western integration after Kiev regains control over all territories of the country, Biden concluded.

The Russian authorities are well aware of those plans. In particular, President Vladimir Putin stated that Ukraine's entry into NATO would pose a threat to security of Southern Russia. The choice of Crimean residents has changed the situation dramatically, Putin said. "You need to understand that we are not against NATO, but we do not the military alliance be the master near our fence. In general, they are good guys, but it's better to let them come to visit us in Simferopol than vice versa," Putin said.

Why are the Americans so interested in the Crimea? The answer is obvious. The Crimea is an excellent point to control the territory of all Black Sea countries - Turkey, Bulgaria, Russia, Romania, Georgia and Ukraine. Today, it is Russia that controls this space.

If the Crimeans had not voted to reunite with Russia at the referendum in 2014, Stars and Stripes would have been blowing in the wind above the peninsula today.

The much-touted project of the European missile defense system that was ruffling Russian politicians and military officials fell apart like a house of cards after the restoration of the status quo in the Crimea.

The Americans started building the infrastructure for their navy in the Crimea long before the Maidan riots in Kiev. In particular, one of the Sevastopol schools was supposed to be transformed into an engineering base of the US naval fleet. The website of the Federal Business Opportunity still contains an announcement about the tender. The attached document details the reconstruction of the school building and includes schemes and maps. They did not forget even about bathrooms with signs in English and Ukrainian languages. They also intended to hang a plaque on the building saying that the renovation of the school became possible owing to donations from the people of the USA to the people of Sevastopol with the support from the department for military cooperation and the US Embassy in Ukraine.

"The Americans were conducting serious preparations to occupy the Crimea, - a member of the Defense and Security Council of the Federation Committee, Dmitry Sablin said. - A year before the events on the Maidan in Kiev, the Americans had made an estimate for the renovation of a number of buildings in the cities of Sevastopol and Simferopol, where they planned to deploy staff and intelligence units. They regarded military airfields and garrisons, which then belonged to Ukraine, as their military installations and even sent instructions for their re-equipment to match NATO standards. April 2014 was the month to start the US settlement in the Crimea. They thought that the issue had been resolved, but the Russian referendum messed up all their cards. On March 18, the Crimea became Russia again, and visitors from overseas were not welcome to arrive. The Americans later admitted that the Russians had outplayed them in all respects. Out of helplessness, they started to impose sanctions on Russia afterwards, to take revenge for the loss of the Crimea," the official said.

Americans will never forget how they lost Crimea to Russia

Many Western experts also spoke about such plans of the US authorities. Given the fact that the agreement with Ukraine on the lease of the naval base of Sevastopol by the Russian Navy was expiring in 2017, and the USA could have gained full control over the Black Sea. From the Crimea, it is easy to launch missiles in the direction of Moscow and Voronezh and, if necessary, Ankara.

If the 2014 referendum had not returned the Crimea to Russia, the Americans would have deployed a variety of their arms systems on the peninsula. Victor Sokirko, an observer with Zvezda, believes that it could go about intercontinental ballistic missiles Minuteman III and land-based ICBM MX. Strategic bombers (B-52H and B-2), as well as F-22 fighters and A-10 Thunderbolt attack aircraft would have been deployed on Crimean airfields. Aegis system, which is considered the prime system to counter Russian ICBMs, would have been a lot more efficient if it had been deployed in the Crimea.

"The plans to deploy NATO bases in the Crimea were announced in the early 1990s, - Director of the Center for the Analysis of Strategies, Ruslan Pukhov said. - The Americans were trying to attract the Ukrainians in every way by inviting them to take part in joint drills. The Ukrainians, having a sense of grandeur about themselves, were rushing to participate in the drills, where they would play a very mediocre role for dry rations and pink toilet paper. The Ukrainian authorities were happy to let US warships enter the ports of Sevastopol and Feodosiya, while local residents were chanting "Yankee go home!" The Americans saw the Crimea as an unsinkable aircraft carrier in Russia's backyard. They were going to stuff the peninsula with all sorts of arms. US officers had been inspecting military objects in the Crimea as if they were somewhere in Florida. They even designated beaches for their servicemen."

It goes without saying that the Americans will never recognize the Crimea as part of Russia. State Department spokesman John Kirby said at a briefing on Wednesday that Russia's military buildup in the Crimea was inadmissible. He urged Moscow to comply with the Minsk Accord and said that the Crimea would always remain a part of Ukraine.