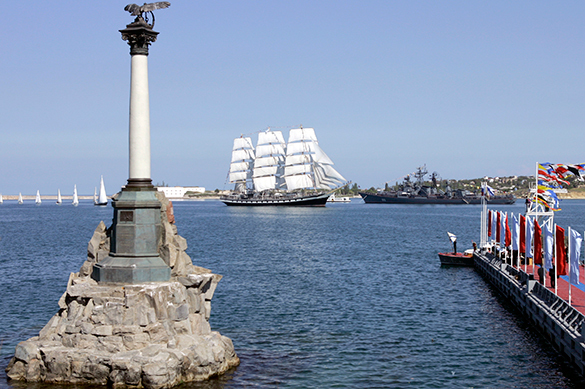 "Approximately 96% of Russians believe that Crimea is a part of Russia, and the group has not declined in two years. In fact, even before the reunification, we asked people this question in 2013: "Do you think that the Crimea is Russia or not Russia? More than half of Russians said that it was in fact a part of the Russian territory," Ferodov told RIA Novosti. "The Crimea had been a part of Russia for 200 years, no matter how Russia would be called - the Russian Empire, the Soviet Union or the Russian Federation. The fact that the Crimea was a part of Ukraine for a quarter of a century is seen in Russia as a strange and definitely unfair "zigzag" of history.

Commenting on the results of opinion polls in Europe and America, where only a third of the population considers the Crimea a part of Russia, Fedorov noted that the data suggested pressure of political elites on the public opinion at the time when people wanted the Russian-Ukrainian conflict to end as soon as possible.

"The entire Russian-Ukrainian conflict is skillfully moderated by European and American elites, but this conflict is not important for the European Union. In the EU, people want the conflict to end soon," the official said.

In a survey conducted by renowned British research company Populus and the largest French company Ifop, the question "Do you believe that the Crimea is a part of Russia or not?" received positive responses from 39% Italian and 37% Germans responded. In the UK and the Netherlands, the percentage of those who consider the Crimea a Russian territory makes up 33% and 32% respectively. In the United States and France, the share of those who believe that the Crimea is a Russian territory, makes up 26%. At the same time, the percentage of the answer "I don't know" is the largest in America.

Therefore, about a third of Americans, Dutch, British, French, Germans and Italian nationals believe that the Crimea is a part of Russia. The poll in the US, the UK and the Netherlands was conducted by research company Populus on March 4-9, 2016.

Pravda.Ru asked an eyewitness of Crimea's return home, writer Sergei Veselovsky, to share his thoughts and memories of the epoch-making event.

"In a nutshell, it all started for us on February 22, the day after the coup in Kiev, when Ukrainian President Yanukovych was forced to flee not to end up like Gaddafi. We buried two of Berkut fighters, who were killed in the riots in Kiev. That was the moment, when the people's militia was formed. Sergei Aksenov (the sitting leaders of the Crimea), took everything under control. We set up an information front after the meetings near the Crimean Parliament. We took the office of American agency IREX Media and started our broadcasts. It was the first time when we told the world that there were no gunmen or tanks here."

"There are things that the Crimeans are afraid of. The people are scared of crazy people from Ukraine - murderers like Savchenko - cruel, cynical people who are ready to kill innocent people for the sake of their political beliefs," said the expert.