Fourth line of the power bridge to Crimea has been put into operation some hours ago. It's a historical event, which has put an end to attempts of the Kyiv authorities to revenge on the Crimean residents for their choice in 2014 with an energy siege. 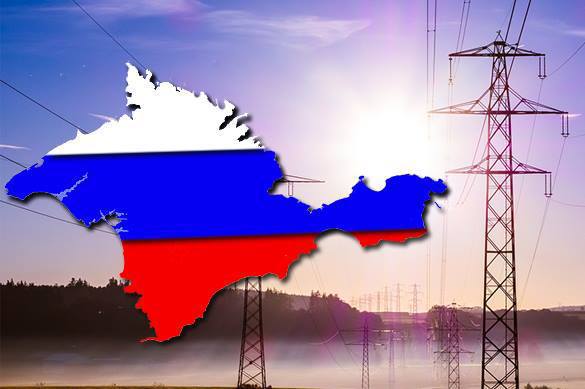 As the last line is put into operation, Crimea will be getting about 250 MW. It will totally provide the peninsula with power and let the 2016 holiday season be started without any problems.

Leader of the country is sure that our state will break any siege, not only an energy one, "if someone decides to train us."

"We managed to break the energy siege of the Crimea in a very short time. Actually, I have no doubts that in case there is such a need, we will break any siege, if someone decides to train us," the President claimed during teleconference dedicated to the Crimea's power supply.

According to head of the state, power bridge to Crimea should withstand the holiday season.

Vladimir Putin pointed out that over 50bln roubles are allocated for development of the power system in Crimea, and a powerful infrastructure reserve will have been set in the peninsula by 2018 for the sake of economy development.

Supply cable was put under the Kerch Strait by a special Chinese vessel Jiangong-1. Construction has been finished in less than a year.

It is intended to build-up our own generation of power in the Crimea by 2018. Two more thermal power stations worth 44.6bln roubles are planned to be built in the peninsula in the nearest years.

As Pravda.Ru reported, first attempts to siege the Crimea were undertaken in October 2015. At the time some Tatars and Ukrainian activists tried to destruct power line pylons in the Kherson region, which connected the peninsula with continental Ukraine. In November they blew up four pylons, which completely stopped energy supply to the Crimea. Radical movements' activists also prevented any attempts to restore the supply.

It was not just deliberate siege of the Crimea by Ukraine, but it also evidenced the extent to which the Ukrainian law enforcement system was destroyed. Europe also called on the Ukrainian authorities to restore power supply immediately and not to make the Crimean residents being hostages of political discord. However, the Ukrainian officials showed total disability or unwillingness to do something.

"Ukraine in fact lost its right to exercise monopoly power at the administrative border with the Crimea. But the Ukrainian authorities can do nothing, as interests of the Western elites, that are engaged in fight against Russia, may stand behind it," Director of the Ukrainian Institute for Analysis and Management of Politics Ruslan Bortnik told Pravda.Ru.

It should be noted that under this critical situation residents of the Crimea showed courage and readiness to endure all the difficulties. Given a survey, which was conducted in December 2015, 59% of the Crimeans expressed their support of the authorities and readiness to work together for the sake of happy future.

Today, on 11 May, it may be stated that all the "energy difficulties" of the Crimeans are left behind.

Russia
Putin grants Russian citizenship to Edward Snowden
15:03
Kremlin: Russia still ready for talks with Ukraine, but conditions have changed
13:30
Russian and Chinese warships spotted off the coast of Alaska
12:57
Global Times: The Fed causes world to experience 'economic earthquake'
12:33
Scale of destruction at Nord Stream estimated as unprecedented
20:14
September 2022: Where are we (going)?
19:40
Turkey's decision on referenda will not ruin Ankara's ties with Moscow
19:16
Putin grants Russian citizenship to Edward Snowden
19:00
Consul of Japan caught red-handed for espionage in Russia
18:48
The status of the special operation in Ukraine likely to be changed after referenda
15:57
Lavrov at UN General Assembly: No more exceptionalism and unipolar world
РусскийDeutschFrançaisPortuguese