Russia retaliates for downed helicopter, strikes IS in Syria again

Six Russian long-range Tu-22M3 bombers attacked positions of the Islamic State terrorist group in Syria. A large field camp and three armories of the militants in the area east of Palmyra, Es Suhne and Arak were destroyed in the attacks of the Russian Air Force, a statement released on Tuesday, July 12, by the Russian Defense Ministry said. 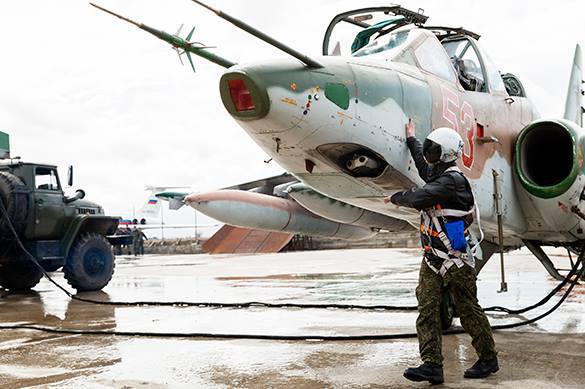 "On the morning of July 12, six long-range bombers Tu-22M3 took off from the airport based in the territory of the Russian Federation and struck a focused blow with high-explosive ammunition on the objects of the Islamic State terrorist group in the east of Palmyra, Es Suhne and Arak," the message from the ministry said, RIA Novosti reports.

The airstrike was conducted on the targets that had been previously identified and confirmed through several channels of intelligence during the last several days, the message said.

"As a result of the strike, a large field militant camp, three warehouses of ammunition and weapons, three tanks, four armored personnel carriers, eight vehicles equipped with heavy machine guns, as well as a large number of enemy personnel have been destroyed," the statement from the Defense Ministry said.

Having completed their mission, all the Tu-22M3 bomber aircraft safely returned to their airfields.

The attacks on the positions of the Islamic State followed the shoot-down of a Russian Mi-35 helicopter that took place on July 8 in the province of Homs. The missile that struck the Russian military chopper in the tail killed two pilots. The pilots, Khabibullin and Dolgin, have thus become the 12th and 13th Russian servicemen killed in Syria.

Russia launched the military operation in Syria began on September 30, 2015. On March 14, 2016, President Putin ordered to withdraw most of the Russian troops from Syria, leaving a part of the military equipment and a limited contingent of troops in the country to support the Syrian government troops in the fight against terrorist groups.