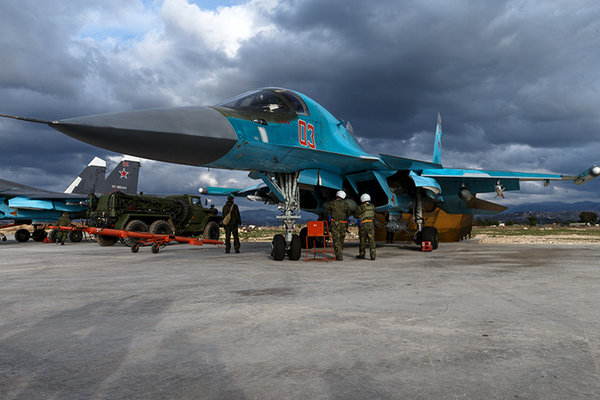 Putin discussed the decision to withdrawal the Russian military group from Syria only with Bashar Assad, the official spokesman for the Russian president, Dmitry Peskov told reporters.

On Monday evening, at a meeting with Russian Foreign Minister Sergey Lavrov and Defense Minister Sergei Shoigu, President Putin ordered to start withdrawing Russian forces from Syria.  The operation is expected to begin tomorrow, March 15. Giving adequate orders, Putin stressed out that "in general, the tasks assigned to the Ministry of Defense, have been accomplished."

A message posted on the official website of the Kremlin later said that Putin called his Syrian counterpart Assad and informed the Syrian president of the decision.

According to Peskov, it goes about the start of the withdrawal of the Russian military group. However, the air base in Hmeymim and the naval base in Tartus will remain. Putin ordered to ensure full security of these two objects from air, land and sea, said Peskov. He added that the military facilities would be used to monitor the implementation of the ceasefire.

Russia announced the start of the operation in Syria on September 30, 2015. Russia's Federation Council had unanimously approved the decision.

Defense Minister Sergei Shoigu summed up the results of the Russian operation in Syria. According to Shoigu, Russia has managed to cease the supply of resources to terrorists and destroy more than 2,000 militants.

The Syrian troops have liberated more than 400 settlements and more than 10,000 km2 of territory with the support of the Russian Air Force. Since the end of September, Russian aircraft have conducted more than 9,000 sorties.

"As a result of the strikes, we have managed to stop the supplies of resources to terrorists and cease trade in hydrocarbons. The main routes to supply hydrocarbons, weapons and ammo to militants have been blocked," Defense Minister Shoigu told Putin.

"On the territory of Syria, we have destroyed more than 2,000 terrorists - natives of Russia -  including 17 warlords," Shoigu added, RIA Novosti reports. "We have also established control over oil and gas deposits near Palmyra - three large fields that have already started working as usual," the minister said.