The Pentagon has accused the crew of the Russian patrol ship Yaroslav Mudry of giving false alarms and attempts to move closer to the US destroyer Gravely that covered the Harry Truman aircraft carrier. 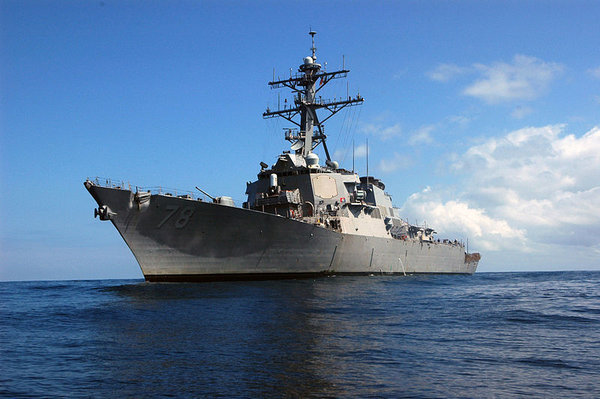 According to Pentagon officials, the Russian patrol boat "raised day shapes 'ball-diamond-ball," thus signaling restrictions in maneuvering in accordance with International Regulations for Preventing Collisions at Sea. At the same time, the crew of the Russian vessel, by VHF radio, demanded the US destroyer should maintain a safe distance. However, when the Gravely changed her course and speed, the Russian patrol boat also changed her course. The fact, US officials believe, thus suggests that the Russian vessel was not restricted in her ability to maneuver.

According to Defence News, the captain of the US destroyer suggested that the Russian patrol deliberately attempted to prevent the US aircraft carrier from conducting her operations.

Earlier, the Ministry of Defense of the Russian Federation accused the crew of the USS Gravely (type Arleigh Burke) of making a dangerous approach to the Russian patrol ship Yaroslav Mudry in the eastern Mediterranean on 17 June.

Russian military officials said that the Russian ship was traveling in international waters in a constant course and did not conduct any dangerous maneuvers against the US vessel.

Thus, the Americans committed a gross violation of the International Regulations for Preventing Collisions at Sea.

Russia and the United States have had a number of conflicts in the Mediterranean and in the Black Sea in 2016. In one episode, Russian fighter jets made it clear to US vessels that they were staying in foreign waters. Yet, the Americans did not respond to the warnings. To add more fuel to the fire, on June 6, US destroyer Porter entered the Black Sea, and stopped at the port of Varna. In addition, USS Dwight Eisenhower entered the Mediterranean Sea, where the Harry Truman was already staying, from the side of the Atlantic. Later, a senior officer of one of the destroyers admitted in an interview with The Wall Street Journal, that the goal of the move was to demonstrate power.

On June 19, German Foreign Minister Frank-Walter Steinmeier expressed his opinion about the incident:

"What we shouldn't do now is inflame the situation further through saber-rattling and war cries. Whoever believes that a symbolic tank parade on the alliance's eastern border will bring security, is mistaken. We are well-advised to not create pretexts to renew an old confrontation," he said.

According to experts and the military, "the Russian ship did not conduct" any dangerous maneuvers against the US and was traveling in international waters.

"The US military has been consistently accusing Russian pilots and sailors of their incompetence. However, the incident of the dangerous maneuvering of the Gravely destroyer has shown that the US Navy can afford to forget about the basic principles of navigation safety," spokespeople for the Russian Defense ministry stated.

Several other serious incidents have occurred during the recent months in the Baltic and in the Mediterranean Sea. For example, NATO anti-submarine and reconnaissance aircraft with their transponders off tried to reach to Russian borders for reconnaissance purposes, but the Russian patrol ship opened warning fire in the air, when a Turkish seiner stood on her way and NATO fighters "escorted" the aircraft of the Russian Defense Minister as it was flying over the Baltic Sea.

A US spy plane could thus kill hundreds of passengers from Japan and Switzerland, as the aircraft was spying on Russia's borders with turned off transponders. The Russian Defense ministry summoned the US military attache in connection with the incident over the Sea of ​​Japan near the Russian borders. Prior to that, news agencies had reported about a "UFO" approaching European jetliners, but the actions of Russian air traffic controllers and air defense made it possible to prevent collisions.

In addition, Russia's Su-24 was forced to come close to the Aegis and missile equipped destroyer Donald Cook when the latter was showing the colors near the marine borders of Russia.