Russia must be armed to the teeth to stop NATO's aggression

Russia was destroying its defense industry purposefully during the 1990s. The then Russian administration believed that Russia had no enemy at all. The demilitarization of the economy cost Russia a lot. Luckily, the country woke up on time. Nowadays, the revival of the Russian defense industry is in full swing. 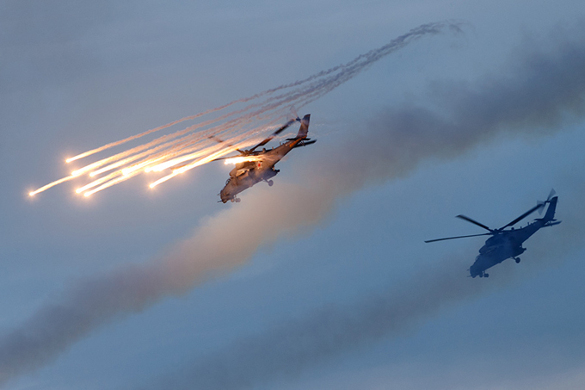 War is a terrible thing. This is probably the most terrible thing that may ever happen in the history of mankind. One has to do everything possible to avoid wars. If they occur, one must do everything possible to finish off the armed side of a conflict, as Russia did in Syria, for example, acting as a sponsor of a peace conference between the Syrian government and opposition.

The taste of blood

NATO's aggressive stance is the most unpleasant thing in this situation. The current generation of Western politicians like the taste of blood. They are like predators, like sharks in the sea, rushing to catch and kill their prey.

After the collapse of the Soviet Union, we have seen NATO's aggression in a number of countries. We saw it in Iraq, Libya, we saw it in Yugoslavia, and then Serbia, in an attempt to organize an armed invasion of Syria.

Russia needs to be fully armed to be able to stop NATO's aggression. Russia needs to spend money on defense, otherwise we will have to pay with blood.

Of course, we hope that all these weapons will never be used in combat action. Yet, all these weapons act like a cold shower to cool the ardor of the hawks in the Pentagon. They behave very aggressively. On the one hand, they try to intimidate Russia, but on the other hand, they talk about the (imaginary) Russian threat. This is partly due to the fact that they are in the midst of the budget year, and the US military-industrial complex wants to receive as much as possible as the outgoing president prepares to leave the White House.

Russia executed state orders on new models of weapons on the level of 97 percent in 2015. This seems a lot, but three missing percent is a lot too. The missing three percent accounts for 15 aircraft, eight ships and vessels, 17 units of automatic control systems, three Rokot carrier rockets, one upper stage, 253 rockets of various purpose and 240 armored vehicles."

President Putin was concerned about the delayed and failed contracts. The reasons include poor organization of planning activities, low level of attracting labor resources, cessation of production of spare parts and materials, losses of production technologies. Indeed, Russia has lost the productions that it used to have in the former USSR.

"We know that people may work somewhere in three shifts, including at night, but somewhere else production capacities are underdeveloped. This is a result of uncoordinated work, and there is a lot to be done to achieve the required result," Putin said.

Russia is running the import substitution program, the production of many components has been launched, but there are still problems in many areas. At the same time, restrictions on the supply of spare parts from Ukraine, NATO and EU countries did not affect the execution of state order in 2015.

If Russia destroys its metalworking, the country will inevitably have problems in the defense industry. For the time being, China helps Russia solve many of its problems, but this is not the case, because the defense industry is the area, where Russia must rely solely on itself.