Putin's third term in the office: What has the president accomplished?

Four years ago, Vladimir Putin received the support from 63.6 percent of electors (more than 45.6 million people) and took office as President of Russia. 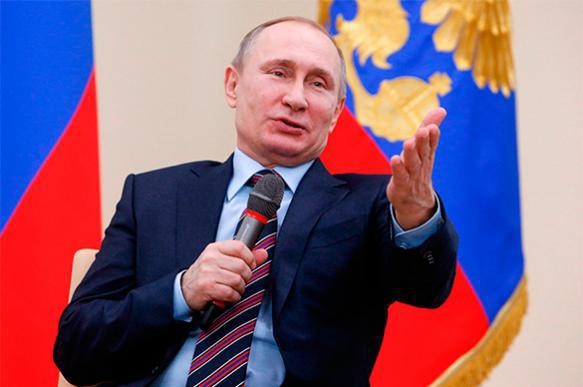 Presently, a presidential term in Russia counts six years. According to Leonid Polyakov, a member of the Institute of the Socio-Economic and Political Research, increasing the presidential term in Russia from four to six year was quite appropriate, as it enabled president to implement a long-term program of the country's development and respond to external challenges. In addition, holding the presidential and parliamentary elections in Russia separately relieved the country from costly political predicaments, the expert believes.

According to Polyakov, the reform of the country's political system has resulted in the appearance of more than 70 parties (officially registered ones) that represent all groups and layers of the Russian nation.

The electoral reform conducted on the basis of "competitiveness, transparency, legitimacy" principle has significantly increased the guarantees of fair political struggle, the political scientist said in an article published in the Rossiyskaya Gazeta newspaper.

Leonid Polyakov believes that the ruling pro-presidential party United Russia follows the same principles in its activities. The expert also pointed out the role of the All-Russian People's Front that serves as a platform for interaction between the President and social forces on the most pressing socio-economic and politico-administrative problems of the country.

The All-Russian Public Opinion Research Center (WCIOM) conducted a study in January of this year that showed that 74 percent of Russians expressed their willingness to vote for Putin in the upcoming presidential elections. The figure was the largest in four years (plus 40% since October 2012).

The poll showed that 78 percent of young people were ready to vote for Putin as well, although the number was 53 percent before. Eighty percent of financially secure Russians said that they would vote for Putin at the next presidential elections (earlier - 54%).

The president has regained both the core electorate and retrieved the confidence of young affluent voters, the expert said.

"The new well-to-do citizens are a product of Putin's presidency. They appeared from 2004 to 2014, when population's income was growing at a fantastic rate. As it often happens, this segment of the population started to behave like an old woman from Pushkin's fairy tales. They started wanting more and more. Luckily, they stopped, having realized that they could eventually stay with nothing. This is a well-known Russian dilemma: either the great Russia or great upheavals," Konstantin Simonov said in an article published in the Komsomolskaya Pravda newspaper.

Speaking about foreign policy, one should mention events in Ukraine and Syria.

"The secret of Putin's electoral success is clear. It can be explained with one word only - Crimea. For most people, this is not just a peninsula, but the retrieval of Russia's authority," Simonov said.

"The Olympic Games in Sochi, the Crimea, Russia's position on Syria - all this affirms Russia's return to the political map of the world. The vast majority of the Russian population agree with this approach and show their support to Putin - even those, who went to Bolotnaya Square several years ago to express their protest against him," the political scientist said.

"The anti-Russian language policy, aggressive anti-Russian and anti-communist propaganda, the Odessa massacre in Ukraine made the people of Crimea and Donbass realize the need to decide their own destiny. The unanimous support from the Russians played a decisive role in this, having allowed the president to make historic decisions on the Crimea, Sevastopol and the Donbass," Leonid Polyakov said.

As for Syria, it was Russia's intervention that marked the beginning of the real fight against the terrorist threat. The West encouraged the destruction of Mideastern political regimes under the guise of the "Arab Spring" having thus created the Islamic State terrorist group.

"It was patriotism, as a simple and clear national idea that allowed the president to show Russia's real power and significance to the world. Russia is ready to protect its own sovereignty and national interests, as well as the sovereignty of friendly countries," the analyst believes.

The future of Russia

The current economic difficulties in Russia is the price that Russia has to pay for its foreign policy. The Russians understand that the crisis that they have to go through comes from the outside, says Konstantin Simonov.

After a long period of revenue growth, economic difficulties are seen as temporary problems that spring from the cyclical nature of commodity markets.

"It is easy, for example, to assume that during the Duma elections in September, all players, with a few exceptions, will support Putin. The elections will certainly not be a vote of confidence to Putin, as some said during the previous Duma campaign," said the analyst.