Putin: Russians believe in their future in strong Russia

Russian President Vladimir Putin delivered his annual address to the Federal Assembly on December 3. Traditionally, Putin delivered the speech in the St. George Hall of the Moscow Kremlin. 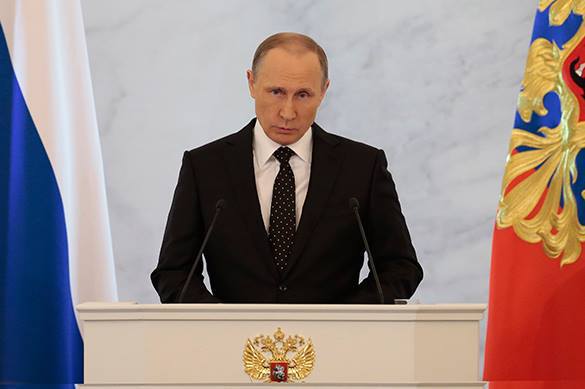 About 1,000 people were in attendance: members of the Federation Council, State Duma deputies, members of the government, leaders of the Constitutional, Supreme and Supreme Arbitration courts, governors, heads of traditional religious confessions and heads of major media outlets.

The President's address is a program of political and legal document that expresses the president's vision of strategic directions of Russia's development in the near future. It includes political, economic, ideological statements, as well as specific proposals for legislative work of the Russian parliament. Vladimir Putin personally works on the document, and the text of the speech can be edited right to the day of its announcement.

About the struggle against terrorism

Putin started the address to the Federal Assembly from thanking the Russian soldiers who struggle against terrorism. The president offered to honor the memory of those people who were killed in the fight against terrorism.

The president reminded that terrorists had killed thousands of Russian people. It took Russia ten years to squeeze terrorists out from Russia. Yet, the country constantly comes across remains of terrorist activities.

Speaking about relations with Turkey, Putin said that Russia was not going to rattle the saber, but economic sanctions would not be the only way for Russia to respond to the downing of the Russian plane over Syria by the Turkish Air Force.

"If someone thinks that by committing a heinous war crime - killing our people - they can get away with it with just tomatoes, or restrictions in the construction and other industries, they are deeply mistaken," Putin warned.

At the same time, the Russian President stressed that he did not put an equal sign between the people of Turkey and the part of the ruling elite that is responsible for the death of the Russian servicemen.

"The Turkish people are kind, hard-working and talented people. In Turkey, we have a lot of old and trust-worthy friends. I would like to stress this out that we do not put an equal sign between them and a part of the ruling elite that is directly responsible for the deaths of our soldiers in Syria," Putin said.

"Probably, only Allah knows why they did it. Apparently, Allah decided to punish the ruling clique in Turkey, by depriving it of reason," Vladimir Putin said speaking about the actions of the Turkish authorities.

About measures to support the economy

During the address to the Federal Assembly, the Russian President proposed a number of measures to support the Russian economy.

Firstly, one needs to change the structure of the economy, as the Russian economy should not be based on the extraction and production of raw materials.

Secondly, the government should offer support programs (construction, automotive, etc.) to some industries.

Thirdly, one should develop programs to support people with low income as responsibility for the welfare of the people has increased.

Fourthly, one should elaborate a balanced-out budget. Next year, the budget deficit should not exceed three percent.

Fifthly, one should improve the business climate in the country and build trust between the government and businesses. Russia should expand the freedom of entrepreneurship to respond to all the restrictions that Russia is dealing with. The tax environment for business should not change in the near future, Putin added.

About elections to the State Duma

The pre-election competition during the parliamentary election campaign in 2016 should be conducted honestly and transparently, strictly within the law, Russian President Vladimir Putin said.

"It is necessary to ensure unconditional confidence in the election results and their strong legitimacy," Putin stated.

Putin proposed to extend the amnesty of capital for six months. It goes about the law on voluntary declaration of assets and accounts by individuals.

"Last year, we announced the amnesty of capitals that return to Russia. Yet, business people do not hurry to take advantage of this opportunity, which means that the proposed procedure is complicated and not safe enough."

The president asked the government to conduct additional consultations with business representatives, the Supreme Court and law enforcement agencies to introduce appropriate corrections.

Russian President Vladimir Putin said that the maternity capital program should be extended for at least two years. Under the current law, women who gave birth to a second or subsequent children, can apply for maternity capital before the end of 2016.

About the development of agriculture

Russian President also drew attention to the problem of agricultural lands that are not used purposefully.

Putin said that one should put millions of hectares of arable land into work. This land is kept in the hands of large landowners, but remains out of use, because many of them are not willing to work in the field of agriculture. Such land should be confiscated and sold to those, who want to cultivate this land.

The head of state also said that Russia should become the world's largest supplier of organic foods.

"We can feed ourselves, but given our land and water resources, Russia could become the world's largest supplier of healthy, environmentally friendly and high-quality food that some Western producers do not even make anymore," he said.

According to the president, one should set a national objective to fully saturate the domestic market with domestic food by 2020.

About healthcare and demography

Speaking about healthcare, the president said that over the past decade, the average life expectancy in our country increased by more than five years and will exceed 71 years in 2015.

The President also said that next year the Russian healthcare system will fully switch to insurance principles.

"It is a direct obligation of insurance companies operating in the field of obligatory medical insurance to defend the rights of the patient, including in cases of the unjustified refusals in receiving free medical care," said Putin.

"According to all forecasts, we should have found ourselves in another demographic hole. The forecasts that we had heard during the 1990s, even from the United Nations Organizations, are not coming true to life. A half of children that are born in Russia are second, third and consecutive children. Our families want to raise children and they believe in their future. They believe in their country. They count on the support of the state," Putin said.